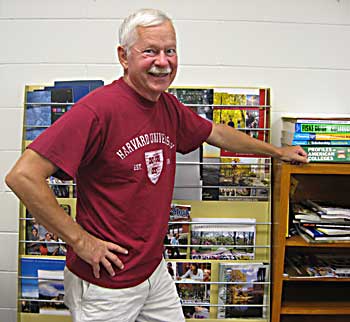 Andy Mahoney has been a guidance counselor at Xavier High School in Appleton since 1985. (Amanda Lauer | For The Compass)

“The priesthood was an honor,” said Mahoney. “I had a lot of support from the sisters at St. Mary’s and my parish priest. I really liked the life of a minor seminarian.”

He went on to the University of Notre Dame, spending his freshman year in their seminary. “I decided when I was in college to pursue being a teacher,” he said. Since education wasn’t available as a major at that time, he majored in economics and minored in theology and philosophy.

His first job out of college was teaching technology at St. Mary High School in Menasha. In 1976 he took a teaching job at Xavier High School in Appleton. “I taught social studies, business, psychology and economics,” he said. “As I was working here I was getting my certification to be a guidance counselor from UW-Oshkosh.”

For 26 years Mahoney was involved in athletics at Xavier. He was the head girls’ basketball coach for three years and won the state championship with his team in 1978. He was an assistant track coach from 1978 until 2002, with three state championships during that time. He was head coach of the girls’ and boys’ cross country teams from 1977 until 2002.

In 1978 Mahoney began his guidance counseling career at Xavier and he became the director of guidance in 1985. This has been the ideal position for him. “I really like working with kids. I like to see the development at this age. I enjoy talking to them. I enjoy learning about their lives and getting them through their high school years.”

Through the years Mahoney has been known for his ability to not only know almost every Xavier student by name but to know most of their schedules as well. “It’s getting harder. My memory’s going,” said Mahoney with a laugh. “I know the juniors and seniors that I work with pretty well. When I was a teacher usually the first day when I was in the classroom I’d know all the kids and their names. I made an effort that way because I think it’s important.”

The biggest change in the guidance counseling profession is that college counseling has become much bigger than it used to be. “That’s why I gave up the coaching because there’s so much more with getting kids into college and so many more demands that way. That takes up a lot of time,” said Mahoney.

Viewing college campuses in person has been one of his missions. He has visited hundreds of schools during his career. When he and wife Beth travel, which they do on a regular basis to visit their five grown children and five grandchildren, they make a point to work university visits into their schedule.

While Mahoney likes to see kids get into their dream colleges, that isn’t the most gratifying aspect of his job. “It’s gotten a little crazy with the competitiveness of the whole college selection thing,” he said. “What I really like to see is kids develop over the course of their four years in high school and realize that they’ve got a lot going for them. It could be academic or social skills or whatever but seeing them grow up and become competent adults, I really like that.”