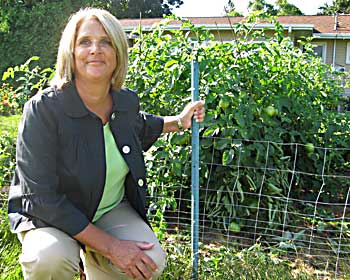 Lynn Graves, TCCES director of food services, is pictured in a garden behind St. Gabriel School in Neenah. Graves approached area farmers to see if they would participate in the Farm to School Program, which allows schools to purchase food for school lunches. (Amanda Lauer | For The Compass)

Lynn Graves, TCCES director of food services, sees the value in this program. “We want to purchase produce locally for two reasons,” she said. To help the local economy and to provide more nutritious food that “will retain more vitamins, have less chemicals on them and will be much better for the kids.”

Graves started the legwork several months ago, approaching farmers in the area to see who may be interested in taking part in the program. Oakwood Farms in Neenah and Allen’s Allenville Produce have come on board. “I’ll be purchasing weekly from these places,” noted Graves. “It will be nice because I can get what I want in the quantity that I want. I won’t have to order a whole case of something, so it will be fresh all the time.”

While the growing season in Wisconsin is considerably shorter than places like California and Florida, where this program has been active for decades, the schools should be able to get produce year round. “Between the two places they have potatoes, corn, tomatoes, onions, peppers, melons, green beans, squash and beets. A lot of this stuff, like beets, kids have probably never tried in their lives. I don’t have to buy a whole case of it. I just have to buy some and try it at our schools.”

The price of fresh produce is typically higher than canned goods but Graves said that both farms are working with her to make their prices reasonable. “It probably will end up being somewhat more expensive but I’m hoping with more fresh fruits and vegetables it might entice more kids to eat and purchase lunch.”

This will be a learning experience for the children as field trips to the farms and visits from the farmers to the classrooms are being considered.

Kathy Brown-Miner is a TCCES parent and a registered dietician and exercise physiologist with ThedaCare. She is in favor of this initiative. “My kids like the fresh produce. This is exciting not only from the taste aspect … but also from the nutritional value. If you can get food grown close to home, then you aren’t losing any of that nutritional value.”

She cited some statistics that show the effects of improper nutrition in youth. “There’s been a three-fold increase in overweight teens in the last decade and a 10-fold increase in the number of children with Type II diabetes. Type II diabetes is what we generally see in adults after many years of being overweight,” she said, noting that only one in five youths consume five servings of fruit and vegetables a day.

Graves hopes the initiative increases participation in the lunch program. She also hopes it “shows kids the benefits of eating fresh fruits and vegetables and that it’s also a good idea to buy locally. I think it will be a good partnership between these different farms and a learning experience for the kids.”