Menting: The handyman of Phlox 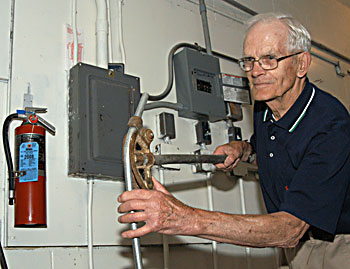 “Roman is a very quiet, unassuming person, but he answers the needs and the calls of a whole lot of people and is certainly a major figure within our parish,” said Fr. David Kiefer, pastor of St. Joseph-Holy Family Parish. “He takes care of our major equipment and checks on it and keeps it in running order.”

“One thing about Roman, I don’t dare put any recognition about him in the bulletin,” said Deacon Tom Hartman of St. Joseph-Holy Family Parish, where Roman and Eileen Menting are members. “He is very opposed to that. He’s just an all-out worker from dawn until dusk, and a very devout, religious guy.”

“He can’t say no to anyone who needs help,” said one of Menting’s neighbors, Dorothy Marx, one of many who’ve been helped by Menting. “He’ll do it and he won’t take money. He’s very generous that way.”

Last year, when an electrical storm caused a power surge, Menting helped Marx with her electrical repairs. “That means a whole lot when you … have someone can you can holler to and will come right away. That’s pretty darn nice,” said Marx, who’s been a widow for 13 years.

Menting was born and raised in Phlox. His father was a dairy farmer who taught him the value hard work and helping others, such as threshing neighbors’ cornfields in the fall. “He did a lot of stuff for people,” Menting said about his father.

Oscar Koeppel, 90, attended St. Joseph School in Phlox with Menting. He recalls the Great Depression days when neighbor helped neighbor. “Those days everybody helped each other,” he said. The experience continues to guide Menting’s outreach to others.

“He does everything for free. You name it, he’s done it,” Koeppel said, including plumbing, electrical, carpentry and gardening work. “He goes out into the (parish) cemetery and waters all of the flowers. I’m glad I don’t have the ambition he’s got. When you need anything, he’ll drop everything and help you.”

Menting is one of 11 children born to Frank and Cecilia Menting. He entered the Army in 1945, just as World War II was ending. One of his four brothers, Robert, was killed in France during the war.

After military service, Menting began a plumber’s apprenticeship. He also trained as an electrician, both important skills that he’s used to help his parish and his neighbors. He spent 25 years as a plumber in Wausau before retiring and turning his attention to community and church service.

“He’s been a supporter and very active in the community and the church,” said Gene Kamps, 74, who is lifetime friends with Menting. “He’s the main electrician for (the parish). If he can’t get it fixed, he’ll get somebody – but he’ll seldom do that.”

Since Menting lives across the road from St. Joseph-Holy Family Church, he’s able to stop in daily and check on maintenance concerns. Living close to church also allows Menting to attend weekday Mass every Wednesday and Friday. “I just believe in having a religion,” he said. “My parents insisted on us being in church.”

His parents’ influence led one brother and three sisters to pursue religious vocations. His younger brother Harold was a seminarian for about three years. Three of his sisters entered the convent. Two, Sr. Camilla Menting of Eagle River, Alaska, and Sr. Mary Anthony Menting of Merrill, remain active while Margaret Menting left the convent but is still active as director of religious education at Our Lady of the Angels Parish in Kenai, Alaska.

Menting relies on his faith in God to help him through difficult times, such as the death of his youngest son Carl, who died in an accident while working in Alaska. After Carl’s death, Menting donated a stand on which votive candles sit and each week he burns a candle in memory of his son and other relatives.

“He’s a very compassionate and sensitive individual,” said Deacon Hartman, who has known Menting since moving to Phlox in 1993. “It’s not something that he shows publicly, but getting to know him personally, there’s a deep feeling side to him.” Prayer and service are “very much integrated into his everyday life,” he added. “As far as stewardship, he’s got the three elements integrated into his everyday life — prayer, service and sharing.

There is no telling when Menting will slow down, but one thing is for sure: He will have big shoes to fill. “He’s a tough model to follow, being so active at his age and always willing to help out,” said Deacon Hartman. “He’s just irreplaceable.”