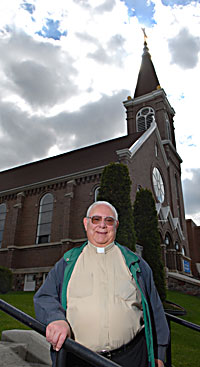 Salvatorian Fr. Loren Nys, sacramental minister at Ss. Peter and Paul Parish in Kiel, stands outside the church in this 2007 file photo. (Sam Lucero | The Compass)

Ss. Peter and Paul Parish, which emerged from that humble beginning, will celebrate 150 years of faith on Aug. 16. The celebration opens with 9 a.m. Mass with Bishop David Ricken. A children’s choir was formed for the Mass, which will also include the official installation of Joseph Zenk as parish director. An anniversary meal follows the liturgy.

The parish history actually traces back more than 150 years. Catholic pioneers from Germany and Ireland had settled in the area as early as 1848. A small log schoolhouse was used as a worship site.

Diane Nett, former parish secretary, has chronicled the parish history for the celebration. She was reluctant when the task was first presented to her.

“I didn’t want to tackle it,” she said. “I decided one afternoon to get started. I could not put it down. I just kept reading and reading from around 2:30 in the afternoon to 3 in the morning.”

Nett reviewed handwritten parish notes and parish minutes. She searched through parish newsletters and bulletins and sorted boxes of photos. Nett has been a part of the parish for 40 years. Her husband, Richard, 70, is a lifelong member. Her affection for the parish made the research enjoyable, she said.

“It was a pure joy once I got into it,” she said. “It was so interesting. For example, it was really fascinating reading about how they turned the old rectory around so it would face north. There was also notes about how in the early 1900s they assessed people’s incomes and reassigned them to different classes for taxes to meet costs of church improvements.”

The first parish school was built in 1878. In 1885, the original church was replaced with a 30 by 60-foot structure for a cost of $2,000. Lightning struck the church steeple in 1894. Fr. George Weiss, the first resident pastor at Ss. Peter and Paul, not only had the church repaired, but extended it by 20 feet and added a new tower.

Renovations and updates have been made over the years. In 1951, an addition to the school was built for $147,000. The school at the time housed 303 students and was staffed by the Franciscan Sisters of Christian Charity.

In 1958, in preparation for the parish’s centennial celebration, the church was redecorated with new lighting, a tile floor and a children’s room. Fr. Francis Kerscher, who became pastor at Ss. Peter and Paul in 1972, oversaw post-Vatican II renovations and restorations in 1973-74. Renovations were made again in 1984 at the time of the parish’s 125th anniversary.

Eighteen pastors have served Ss. Peter and Paul Parish. Salvatorian Fr. Loren Nys, the most recent, arrived in 1993. He retired in 2008, but continues to serve the parish as sacramental minister, celebrating weekend liturgies and weddings and funerals with a Mass.

Fr. Nys recalls the curiosity of parish members at the time of his appointment. He previously served as pastor at St. Mary Parish, Chilton, and St. Martin, Charlestown.

“A delegation (from Kiel) came to a Saturday evening Mass I had at Chilton, just to check out the ‘new’ pastor they would be getting,” he said. “They came back from that Mass telling the parishioners, ‘This guy likes to sing. We are going to have to sing a lot when he comes.’ And so we did. One of my joys over the years was to celebrate the Eucharist with the parishioners, whether that was on weekends or during the week. We sang at every Mass.”

The years at Ss. Peter and Paul have been his happiest in ministry, added Fr. Nys.

“I found the people in Kiel to be exceptionally friendly and supportive in so many beautiful ways,” he said. “There is a good welcoming spirit in the parish with so many individuals coming together, often working behind the scenes to make their parish the great parish that it is to this day.”

He points to the parish custodians as examples of the dedication of the people, including the work of Paul Garvey, Elwood Voland and current custodian Jerry Schmitz.

“We have very good people here,” said Zenk, who has a past history with Bishop Ricken while serving in campus ministry at the University of Wyoming. “It has also been a very good challenge for me. It’s calling new things out of me. I definitely feel called by God and am thankful for the people here.”

Fr. Nys jokingly said the only fault with Zenk is that he is a Minnesota Vikings fan, which leads to some bantering.

“There is a lot of good natured teasing going on between Joe and me, teasing which is the result of a great deal of respect and admiration we have for each other,” said Fr. Nys. “Neither of us feels threatened by the other. I see my role in retirement to be as supportive as I can be for Joe. Whenever I can, I try, in my own way, to let people know that he is our shepherd now and that I, along with them, follow him wherever he leads us.”

Leadership continues to look at the future of the parish, said Todd Olig, parish council president.

“Looking on the horizon, there is a possibility that we will be linking with two other parishes, so we are already working together,” he said. “We want to be proactive instead of reactive.”

Olig said the parish remains blessed to have the service of Fr. Nys, and he praised the working relationship with Zenk. He added that the large majority of parish members have adapted to having a parish director rather than a pastor.

“We have already seen some changes,” he said. “We’ve gone from three weekend Masses to two, which is never an easy task. We continue to listen to what the people want as we moved forward. The vision for Ss. Peter and Paul is to continue to be a welcoming parish. We want to take what we have and enhance it.”

Zenk said the anniversary celebration is a time of reflection.

“It’s the whole idea of who we are and what we want to be as a parish,” he said. “The rootedness of our faith is that it doesn’t end there. We need to pass it on to the generations. What type of church do we pass on? The spirit will take the church where it takes it.”