Scrip continues to be fund-raising success for Catholic schools 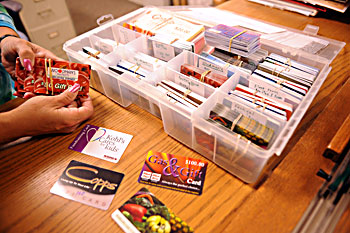 Raising funds for Catholic schools is as simple as purchasing gift cards for groceries, gas and clothing. The program, known as scrip, has been around since the late 1980s and in the Green Bay Diocese, several schools and school systems sold millions of dollars worth of scrip last year. (Sam Lucero | The Compass)

In the Diocese of Green Bay, several Catholic schools use scrip as a major source of revenue and are in the “million-dollar” club, annually selling more than $1 million in scrip. Among the schools are St. Bernard in Green Bay and ACES Xavier (Appleton Catholic Education System), which consists of six schools.

Scrip fund raising began in 1988 in the Diocese of Santa Rosa, Calif., as a way to keep St. Vincent de Paul High School afloat. Since bulk orders are needed to acquire discounts from retailers, the diocese created the National Scrip Center. In its heyday, the scrip center had 9,000 clients and annual sales of $500 million, according to the Los Angeles Times. The diocese cut its ties with the scrip center in 2001 and the National Scrip Center went out of business in 2004.

Today, the leading scrip broker is the Great Lakes Scrip Center of Grand Rapids, Mich., which was founded in 1994.

According to Dan Springer, president of Great Lakes Scrip Center, the company serves nearly 15,000 nonprofit organizations in the United States, including 4,500 parochial schools and 3,000 churches. It is the largest gift card supplier to nonprofit programs in the country. Since 1994, more than $4 billion in retail sales have been made through the scrip center, with nonprofit clients raising more than $220 million.

“Scrip is fund raising while you shop,” said Springer. “The nice thing (is), you’re not sending your children door to door or not bugging friends and relatives to buy things from you they don’t want. The fundamental concept is to ask families to plan ahead a little bit and convert their normal weekly shopping from cash, checks and credit cards into gifts cards from the retailers they shop at.”

According to Jamie Hornberger, co-coordinator of St. Bernard School’s scrip program, the fund-raiser has been a huge success. It is operated by PACE, the school’s parent organization whose task is to support the school through fund raising.

“I think the (scrip program’s) success comes from the fact that people know they are helping the school, but it also helps them on the tuition credit,” she said. “People are trying to make Catholic education affordable and they do it by helping themselves and decreasing their tuition.”

Last year, St. Bernard School sold $1.3 million in scrip gift cards and certificates. It was the second year in a row to reach the $1 million milestone.

The amount of revenue made through scrip depends on how much the retailer kicks in. It ranges from 1.5 percent to 20 percent. “Half of that goes to PACE and the other half goes to tuition,” said Hornberger. For example, the popular KwikTrip gift card selling for $20 offers a 10 percent ($2) profit to the school, with $1 going to the school and $1 going to a family’s tuition credit.

“We are only asking people to buy things that they normally buy, like gas and groceries,” said Hornberger.

Because of its popularity, scrip requires a network of volunteers to keep the program running smoothly. “The amount of time put into this program is huge,” said Hornberger, adding that some 35 to 40 people help take, process and distribute scrip orders.

This fall, St. Bernard School has made scrip fund raising mandatory for school families. “We added another kindergarten teacher and we wanted to be able to help” purchase toys and textbooks for class, added Hornberger. PACE recently purchased a SMART Board and computers for the school using scrip revenue. St. Bernard has participated in scrip fund raising for 16 years, she added.

According to Kayde Ruppert, director of business services at ACES Xavier in Appleton, ACES grossed more than $7 million in scrip sales last year, up from $5.8 million the previous year.

Families are required to pay a fund-raising fee ($100 for elementary and middle school students and $150 for high school students). Ruppert said credit from scrip purchases allows families to pay this fee. Once the fee is paid, scrip credit can go to tuition.

She explained that half of the profits from scrip are shared with families to pay fees and tuition. “The other half is used as fund raising for ACES Xavier,” she said. “If you include (scrip credits used to pay fund-raising fees), last year we generated about $350,000 in fund-raising revenue.”

Last year ACES Xavier added an online ordering system for scrip, which has been a big success, said Ruppert. It allows families to order scrip from home and pick up orders in two days.

Because of its high sales volume, the program “requires significant oversight and management,” said Ruppert. “We order stock every day, rather than maintain a high level of inventory,” which could lead to problems, she said.

ACES Xavier’s scrip program requires a staff of 50 to 70 trained volunteers to meet orders. It costs about $15,000 a year to operate the program, which covers staff costs and shipping fees for gift cards, added Ruppert.

The time and effort put into the program is justified by the amount ACES Xavier receives in return. Next to its annual “Celebrate” dinner and auction gala, scrip is the school system’s biggest fund raiser.