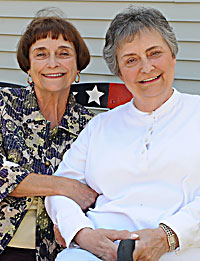 Judy David-Schroeder, left, sits with her sister JoAnn Wales-Leddy at Judy’s home in Appleton. The identical twins are all smiles since a successful adult stem-cell transplant last year. (Sam Lucero | The Compass)

Judy and JoAnn were born Sept. 25, 1936. As they approach their 73rd birthdays, life is now more precious than ever.

Five million stem cells were harvested from Judy, and as a result today JoAnn is in remission from multiple myeloma. The transplantation of adult stem cells is a life-saving measure approved by the Catholic Church, unlike embryonic stem cell transplantation.

For Judy, it was a big hurt when she was approached by individuals who chastised her for her decision to donate adult stem cells to JoAnn.

And this is why Judy chose to contact The Compass.

“So little is known about transplants,” she wrote. “Ours was mistaken by some people who heard all about the ‘no, no’ in the Catholic Church, but I had to explain many times that ours was not an embryonic cell transplant. It’s time that people know the difference.”

What the church says

The Vatican spoke to the topic in December 2008 in an instruction titled “Dignitas Personae,” translated “Dignity of the Person,” from the Vatican Congregation for the Doctrine of the Faith. The entire text, which speaks to the ethical issues arising from biomedical research, can be found at the U.S. Conference of Catholic Bishops’ Web site, www.usccb.org.

Speaking to the topic of the “therapeutic use of stem cells” the instruction says this: “Methods which do not cause serious harm to the subject from whom the stem cells are taken are to be considered licit. This is generally the case when tissues are taken from: a) an adult organism; b) the blood of the umbilical cord at the time of birth; c) fetuses who have died of natural causes.” 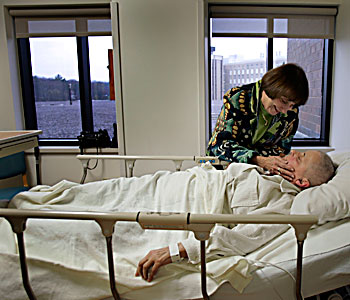 Judy Davis-Schroeder comforts her identical twin sister JoAnn Wales-Leddy following a bone marrow biopsy last November. JoAnn was diagnosed with multiple myeloma and received a stem cell transplant from her sister in August 2008. The biopsy was performed to determine if JoAnn was in remission. (Sharon Cekada, Appleton Post-Crescent | For The Compass)

It is embryonic stem cell use that the Vatican opposes. “The obtaining of stem cells from a living human embryo, on the other hand, invariably causes the death of the embryo and is consequently gravely illicit.”

The Vatican instruction sums it up this way: “There are no moral objections to the clinical use of stem cells that have been obtained licitly; however, the common criteria of medical ethics need to be respected.”

So just what is an adult stem cell?

According to the NIH, an adult stem cell is thought to be an “undifferentiated” cell, meaning it is a cell that has not yet developed into a specialized cell type. The primary roles of adult stem cells are to maintain and repair the tissue in which they are found.

According to the NIH, research on adult stem cells has generated a great deal of excitement and scientists have found adult stem cells in many more tissues than they once thought possible. Adult hematopoietic, or blood-forming, stem cells from bone marrow have been used in transplants for 40 years.

And indeed there was excitement when it was determined that Judy could be the person who could save her sister JoAnn’s life.

JoAnn’s journey through cancer began with fatigue. “I had just moved and I had a few steps to climb,” she remembered. It took some time to come up with the diagnosis of multiple myeloma. “Nobody knew what was wrong with me,” she said. But when the oncologist told her she had cancer, “I don’t remember anything else he said.”

“I don’t even want to think about those times because they were so awful,” said JoAnn.

When plasma cells grow out of control, they can form a tumor, usually in the bone marrow. This type of tumor is called a myeloma, and if there are many tumors they are called multiple myeloma.

Having too many plasma cells can cause problems in the bone marrow, where all blood cells are made. The myeloma also reacts with cells that work to keep the bones strong. Normally, some cells build up bones and other cells work to dissolve them. Together, they give bone its proper shape. But myeloma cells cause too much bone to dissolve and the body does not get a signal to make new bone.

And thus was the diagnosis JoAnn was faced with. It came on the eve of the death of Judy’s husband, Jerry, who passed away in December 2007. He knew his sister-in-law had been diagnosed with multiple myeloma and even through his own pain had told her to fight.

JoAnn did chemotherapy treatment in Madison while Judy spent the winter in Florida. And it was when the doctor learned she had a twin sister that everything changed.

“Her eyes were like saucers,” JoAnn remembered. “‘Do you know she just saved your life?'” the doctor told her.

With that, JoAnn said she started to cry.

Judy traveled to Madison on July 31, 2008, to donate 5 million stem cells. She had to prepare herself at home first with 10 injections to encourage their growth, twice a day for five days. “They told me I would feel like I had an awful case of the flu,” she said.

“I laid in bed one whole day because I felt so awful,” she said.

And while she donated the stem cells with a system she said looked akin to a kidney dialysis machine, her sister JoAnn received the “atom bomb,” drugs that would kill off her immune system. Half the stem cells were saved in the event her sister needs a future transplant.

“It was like science fiction,” said Judy, explaining, “I gave her a complete new immune system.”

The next morning, Aug. 1, JoAnn received the stem cells. Judy was already back in Appleton and her sister called her during the five-minute procedure. “We talked all the while and Judy said I can’t believe any of it,” said JoAnn.

Other people who heard their story could also not believe it, especially that the procedure was sanctioned by the Catholic Church.

“I actually had some people say to me, ‘I thought you were such a good Catholic. How could you do that for your sister?'” said Judy. “People don’t even know what they’re talking about … they just heard the words ‘stem cell.’ That’s why I thought somebody’s got to get the message out.”

“I think (God) sent me cancer because of you,” said JoAnn looking into her sister’s eyes as they talked about the miracle of it all. Her heart-broken sister Judy had found new purpose in her life after the death of her husband. It was to save her sister.

Life has changed in many ways since last summer for these sisters. JoAnn will always deal with some challenging residual effects from her cancer and the treatment. And for Judy, life is different because she moves forward without her Jerry.

But the twins have each other and their smiles and chatty banter say it all.

“I just have an entirely different relationship with God now,” said Judy.