APPLETON — It was a triple-win day at the Community First Fox Cities Marathon when the Kapral family brought a world record back to the United States, the Fox Valley and the Lourdes High School family in Oshkosh.

On Sept. 20, all 16 siblings of the Kapral family of Oshkosh completed the marathon in less than eight hours. This earned them recognition with the Guinness Book of World Records for the most siblings to accomplish that feat. 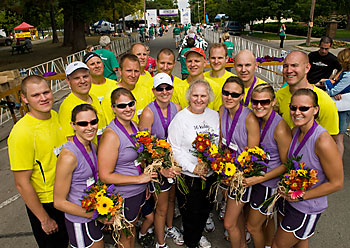 The honor previously was held by the 13-member Weisse family of Oshkosh, for one month in 2007, after completing the same Fox Cities Marathon.

Before the Weisses and after the Weisses, the honor was claimed by families running in the Dublin Marathon in Ireland.

The Kaprals and the Weisses all attended Lourdes High School.

“It was a good experience,” said Chris Kapral, 44, of Ada, Mich., who organized all of his younger siblings – ages 18 to 44 – into preparing for the marathon. “Our times ranged from 3:09 to 5:43, plenty of hours to spare (for the world record). When the last two turned the corner and were on their way to the finish line, it was a real feeling of satisfaction and knowing we had done it.”

Among those waiting at the finish line were the siblings’ mother, Dorothy Kapral, three of her sisters from Michigan and a few members of the Weisse family who came to cheer on the Kaprals.

Nick and Stephen ran times that qualified them for the Boston marathon. Joe determinably running on a prosthetic leg, had hoped to finish at about six hours. He clocked in at 5:43. Two of his children, ages 7 and 5, were so excited when they saw him approaching that they ran out to finish the final 200 yards or so with him.

Chris said their mother was a little apprehensive about challenges some of her children faced, but was happy with the outcome.

“Any time your kids do something together and are successful, it’s a great feeling as a parent,” Chris said. He said his father, John, who died in 1998, also would have been pleased.

“He’d love it,” Chris said. “Dad always got a kick out of it when we’d do things together.”

“He would think it was a neat thing that we were all doing something together, whether it was a marathon or anything else,” she said. As for her mother, she said, “She’s really excited for it. To have everyone home and together is probably the best part of all of it.”

This was one sibling event that none of them had ever imagined “in our wildest dreams,” Michelle said. Joining the marathon actually was suggested by one of the previous record-holders, Paul Weisse of Appleton. When the Weisse record was broken by a family in Ireland, Weisse thought the record should be brought back to northeast Wisconsin. He remembered his former high school classmate, Chris Kapral. When the Weisses were in training to break the world record in 2007, they joked together that nobody should let the Kaprals know because the Kaprals had more siblings, Weisse said.

“We looked online to see how many Kaprals had signed up,” he said. “We knew a lot of them were runners.”

Weisse said the experience of all of his siblings preparing for a marathon together brought them closer together as a family and in more frequent communication. That benefit and the chance to bring a world record back to Wisconsin prompted Weisse to suggest through a mutual friend that the Kaprals train for this year’s marathon.

Like the Weisses before them, not all of the Kapral siblings were eager to join the effort at first.

But Michelle said there was a little bit of peer pressure.

“Chris started sending out e-mails, and one by one everyone agreed,” Michelle said. “No one wanted to be the one person to say no, especially knowing we could physically do it. We’re doing it to honor our parents and to raise money for the Boys and Girls Club of Oshkosh. Our parents have always been very supportive of us, and we’ve always been a very athletic family. We wanted to do something as a family to bring us all together.”

Only two of the brothers had run marathons before. The others found their own training programs that would fit into their lives and started running shorter races to build up their stamina, Michelle said. Many ran races together in smaller groups.

“We do a group page on Facebook and kept each other updated on how our runs were going. Everyone started eating a little healthier and shared tips on how we should go about our training. It’s kind of fun to have a Web site to post all of our updates on.”

Sunday’s race was the first race all the siblings ran together “and our only race, probably,” Michelle said with a laugh. “Most of us aren’t really going for a time. We just want to complete it and make it through.”

As for the record, she said before the race that she was rather indifferent to the outcome.

“We’re just excited to do this together,” she said. “I think it’s nice to give (Lourdes) a little bit of publicity, especially as a small private school. It certainly makes it appear that the school produces strong-willed and determined people. We all got a good education there and are very successful.”

Chris agrees that the best part of the whole experience was not achieving the world record but the closeness it has brought his family.

“This was about getting everyone together and the satisfaction of completing it,” Chris said. “The record – that’s just something for us to rally around. The whole experience has been the only time in our lives as adults that all 16 of us are working toward something. This is the first thing we’ve all had in common. That’s where the benefit is. For the past five months, we’ve all had this in common. It’s been the coolest thing for our family.”

Before Sunday’s race, Weisse said, “I think in many ways they’ve already won, and they’ve been through the hardest part. They’re a very faithful family as well.”

He said the Weisses received certificates for their accomplishment from the Guinness organization, but they never made it into the record books.

“We hope the Kaprals make it into the book,” he said. “We’ll be cheering for them.”