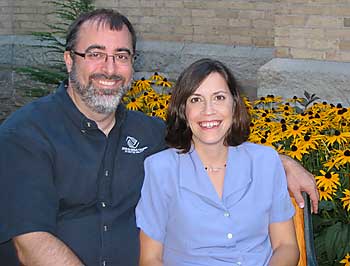 Greg and Andrea Lemke-Rochon (Thomas Kelly | For The Compass)

Andrea began her career as a social worker in Milwaukee, where she worked in a child abuse prevention program based out of Rosalie Manor, a ministry founded by the Misericordia Sisters in 1908 as a refuge for unwed pregnant women. She subsequently worked in child protection for the Outagamie County Department of Health and Human Services for 14 years.

That’s a lot of time – and a lot of kids – considering the average 18-month burnout rate in the child protection profession. “I think a person needs a strong belief in the certain possibility of making a difference in someone’s life,” Andrea said. “There are so many life-and-death decisions and hopelessness. Without faith I couldn’t have survived, I couldn’t have believed in the possibility of goodness coming out of the gravest situations.”

Most recently, Andrea’s responsibilities in the same county department have shifted to the frail elderly and physically disabled adults, where the primary goal is to provide the financial and medical support services necessary to keep these individuals living in community.

At St. John Vianney Seminary in St. Paul, Minn., Greg was also prayerfully discerning God’s call in his life. “My spiritual counselor asked what I found most fulfilling,” Greg recalled. “I told him it was working with kids. He suggested maybe that was what God wanted me to do.”

That experience led Greg to continue serving the local community at a new intervention program focused on steering youth out of the juvenile justice system. Greg recalls the local juvenile court justice – and its primary benefactor – during the program’s infancy. He was convinced there had to be something more, something better, than punishment for these kids.

From its humble beginnings as Youth Services of the Fox Valley in a second-floor office above a downtown storefront, the organization has grown, continually fueled by Greg’s concern that there weren’t enough safe places where caring adults could give youth guidance and support.

Today, the Boys & Girls Club of the Fox Valley has seven locations, serving 12,000 kids annually. As executive director of the organization, Greg has witnessed the evolving needs of the staff and communities he helps support. “We average 800 kids a day. These are the ones who need us most. After school hours pose the greatest risk, and it’s good to be here for them.”

Both Andrea and Greg followed their calling – confident in their firm commitments to children – with no idea that God was steadily guiding them right into each other’s child-centered life. In time they eventually met at a Renew retreat sponsored by the Green Bay Diocese. Today, their marriage of 16 years continues to be blessed with their daughter, Autumn, and son, Jeremiah.

Together, Andrea and Greg acknowledge the blessings they occasionally receive when a particularly challenging youth from many years past reconnects with one of them saying, “What you did for me made a difference,” or “I wouldn’t have made it out of my teens if it hadn’t been for you.”

“Successful and respected lives can blossom from difficult and discouraging circumstances,” noted Greg. “After a while, you start to sense the sacred in everybody. You can see God in every face you encounter.”