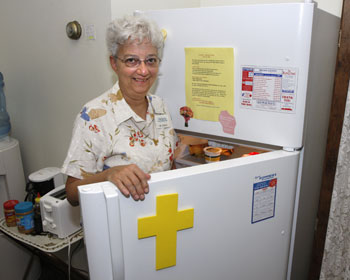 Sr. Fran Bangert, a Sister of St. Francis of the Holy Cross at Bay Settlement, gets supplies from the new refrigerator at Wellspring. The downtown Green Bay drop-in center for women, run by the Bay Settlement Sisters, had requested the energy efficient refrigerator in The Compass’ Wish List this year and it was donated by readers. (Rick Evans | For The Compass)

This year, despite the downturn in the economy, the Wish List had a 59 percent response rate. Ten of the 17 groups on the list received donations.

House of Hope had also asked for comforters and mattresses for their home, which helps pregnant young women and new moms. They did get some comforters as well. Director Jennifer Allen said the laundry soap was important, since they teach young moms how to do laundry for their new babies. Even though House of Hope had also requested twin mattresses for their beds, Allen wasn’t disappointed.

“In the past, we’ve asked for cribs and high chairs and been very successful,” she said. “We’ve gotten a lot of big ticket items. So we are not at all disappointed about not getting the mattresses this year.”

? School Sister of Notre Dame Susan Clark, chaplain at Oshkosh’s medium security prison, requested money for items such as hosts and missalettes, as well as candles and altar cloths, since they have Mass and Catholic services for more than 200 men.

The StreetLights Outreach in Green Bay, which received $150 of grocery gift cards to help with their nighttime outreach to homeless and marginalized people. The outreach offers food and beverages each week, from April to October, and also sponsors monthly block parties attended by up to 150 people.

Sr. Adele Demuling, of Le Royer Hospice in Antigo, received donations from 10 different people to help pay for her staff to attend a seminar on the psychology of dying, as well as buy grief booklets for families of patients.

This year’s big ticket item was donated to Wellspring, a downtown Green Bay drop-in center sponsored by the Sisters of St. Francis of the Holy Cross at Bay Settlement. It assists up to 250 women a month. They needed a new, energy-efficient refrigerator. Director Sr. Fran Bangert said, “A couple came in and did all the legwork to find us the energy efficiency, low cost and size of refrigerator we needed,” she said.

Other donations included the new transitional apartments of Marion House, a Green Bay group home for pregnant teens and teen mothers, which got the folding chairs and tables they requested.

One of the more creative requests came from Dominican Sr. Caroline Sullivan. She requested that “every reader of The Compass would donate a talent” to the Bridge-between Retreat Center in rural Denmark. And many did. Staff member Diane Eparvier said volunteers have been “coming out in full force” at the center’s working farm and organic garden.

And in Oshkosh, the Place 2B had another request. No, they didn’t get the kitchen appliances they need for their free meal programs. But director Joe Geniesse also hoped to get families to adopt one of the rooms in the Holy Family Shelter. Three families did come forward to personalize rooms.

“It’s been a dream,” said Geniesse. “I’m very happy.” (There are still 147 rooms waiting for other families to adopt.)