He loves the Knight life 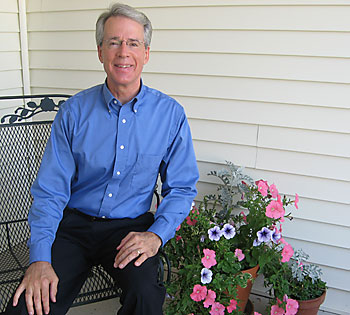 Mecca, who is a partner in a financial planning business in Brillion, said he was never asked to join the Knights but came across the group by chance in 1999 when searching on the Internet for Catholic organizations.

“I was drawn to this organization. I wanted to do some charitable planning in my community and that’s a very big part of being a member of the Knights of Columbus. When I saw the combination of spirituality and charitable planning, I jumped at it,” recalled Mecca.

“We do charitable drives in the community to give money to needy organizations,” he explained. “We’ve given money to young seminarians. We give to Haven of Hope, a community organization that provides day care services and respite services to parents who have children with special needs. We help LEAVEN and Elizabeth Ministries. We’ve given to the Cops Program – they provide emergency shelter for the needy in the community.”

The average age of the 170 members in Mecca’s council is about 70. “It seems like most people don’t get involved until they retire. They feel it’s an obligation that requires so much time.” But that’s not necessarily true, said Mecca.

“We need many individuals to do a number of small tasks,” he said. “We need more ambitious young men who have the drive to espouse their faith in the church but also the drive to be creative to carry out the many activities that we do.”

While the Knights take up a good portion of Mecca’s time, he also helps out at his church and is a hospice volunteer with ThedaCare. Mecca is now in the process of studying at St. Norbert College to be a healthcare chaplain. He recently joined a clinical pastoral education program as well.

“Many years ago I worked in hospitals as a nurse’s aide in consideration of becoming an RN,” he said. “I interacted so much with so many different people dying that I felt a spiritual connection with the dying process. Last year I had a conversation with the chaplain of our council, Fr. Bob Lexa, who inspired me to live out my ambitions. My interest is to ultimately work in healthcare and perhaps even hospice, specifically as a chaplain.”

Wherever Mecca’s career ends up, he plans to remain a member of the Knights of Columbus long after he finishes his term as the grand knight.

“Being a Knight is basically putting your spiritual faith in action and doing for others – reaching outside of yourself,” he said. “We focus on the values of charity, unity, fraternity and patriotism. Personally I just love the Knights and you meet the greatest people; great in the sense that they’re so giving. They volunteer so much, you wonder if it’s their full-time job. It’s the kind of people who are community minded and are interested in acquiring funds to do good for their community.”