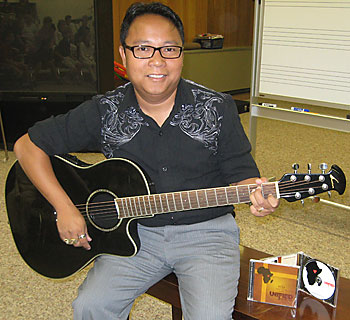 Arboleda and his wife Claire have five children ranging in age from 2 to 10. “She’s my great partner in terms of keeping everything all together both at the house and at work,” he said.

While he wrote songs in college, he wasn’t able to devote any time to song writing since, until an incident last year. “I was helping at a Vacation Bible School,” recalled Arboleda. “I was leading the singing/worship time. In between sessions I came across a verse from Deuteronomy and for some reason I was reading the passage and it struck me, ‘I think this would be a good song.’

“So I started copying the verses. I had a feeling that I had to write it down before I lost the chance,” he added. “That same night I grabbed my guitar and started writing the melody for it, figuring out the chords for it. The title of the song is ‘Song of Moses.'”

Following the lead of some friends who are musicians, Arboleda recorded his song and posted it on his My-Space account, an online social networking site. “It was a way for me to record it and have it on file,” he said. “Last summer I was able to write four songs and during the school year I was able to add four more so everything was on MySpace.”

The Song of Moses was posted in June of 2008. Towards the end of that summer Arboleda received an e-mail from a company called QuickStar Productions. They were putting together a compilation CD featuring Christian music called “Unified by Grace,” Midwest Rock Vol. 3, and had selected Arboleda’s song to be a part of the album.

“The CD is actually like a mission project as well,” explained Arboleda. “The proceeds of this CD project go to support a church and a community in Uganda, Africa. When I write songs I really want them to be used somehow for something that would reach out to others.”

The CD was released this past June on iTunes. A month later Arboleda received 50 copies for his personal use and for distribution. The album and his single are still available on iTunes, but Arboleda has extra copies of the album for sale.

Now Arboleda is inspired to create a solo album with worship songs. He has 10 of the 12 songs complete. Last school year his first grade class at St. Mary’s in Menasha helped him pick the title for one of his songs.

“My students are so excited to listen to my music. Sometimes when they’re coming down to a music class they’ll hear me playing something on the piano,” he said. “So when I mention to them, ‘That’s my new project,’ they say ‘Play it for us.'”

When writing his songs, Arboleda tries to create something appealing, yet with a positive message. “Part of my writing is my desire to serve God and a way to give a good message out there. I share with my students that they have to be selective with the types of songs they listen to because sometimes there are some songs that give you negative ideas.”

While Arboleda’s first calling will always be teaching, he has a dream for his musical career. “My ultimate wish is, if God would keep giving me the songs, that my songs would be used by churches for worship time. I’m just being used as an instrument to write the songs. It would be a good feeling on my part if the songs that I wrote were actually being used by people to sing praises to God.”