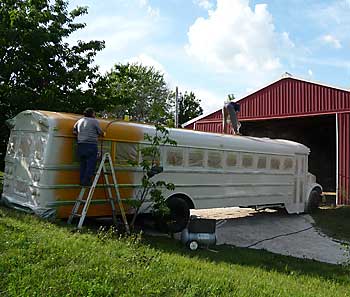 Members of the Holy Rosary Parish Human Concerns Committee paint a school bus that will serve an orphanage school in San Pedro Sula, Honduras. The bus, donated to the committee by Daun Transportation, will be driven to a southern U.S. port in late October for shipment. (Submitted photo | For The Compass)

“We took the bus to have it licensed in Milwaukee, and it needs two front tires,” said Whorrall. “The lights now have to be taken out and metal plates have to replace them. Several other license issues that we were first told weren’t important we now have to do. Other charities, in and outside of Wisconsin, said they didn’t have to do any of this, but we make each setback a learning experience.”

The Honduran school is housed at an orphanage. The facility was originally designed for 29 boys who were deemed too disruptive for their towns. Word spread that a volunteer teacher was making progress with the boys through the use of psychology and art.

“The school became very coveted for other children because they cannot afford to go to school,” said Whorrall. “They started asking if they could go to school at the orphanage and they didn’t turn them down. It now serves 70 to 85 children who wouldn’t have any other form of schooling.”

The school was going to be closed if a suitable form of transportation was not found, so the bus is essential for its future. Sending the bus from a port such as Miami or New Orleans is expensive.

“It’s incredibly difficult in this economy for a charity to raise money,” he said. “We had a lot of donations that were anonymous that saved us. It will cost just under $4,000 to send it.”

The bus is now scheduled to be shipped in late October. The new tires put the project over budget, but the group perseveres. The Holy Rosary Human Concerns Committee was founded in 2005 by a group of teens under Whorrall’s guidance. He taught ninth grade religious education and shared his mission experiences from Honduras with the students. They formed the committee and targeted causes in the mountain villages in northwest Honduras.

The first major project for the group was supporting a nutrition center built by a Honduran Catholic church.

“The center takes children off the streets and brings them back to health,” said Whorrall. “These kids are in very poor health. They are found wandering after their parents had died or they were abandoned. The nutrition center is in pretty good shape. A group from Texas supports it as well, so together we are doing a pretty good job.” 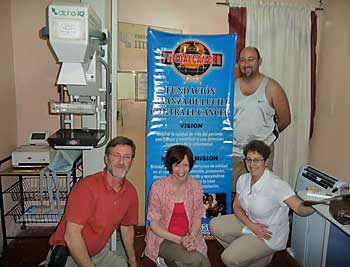 Ron Reese, standing, Dave Whorrall, Jean Vogel, center, and Judy Woelfel, members of the Holy Rosary Parish Human Concerns Committee, pose in front of the mammography machine at FundalCancer, the cancer clinic in San Pedro Sula, Honduras. The committee donated the mammography machine. The foursome traveled to Honduras in March of 2009 in search of new outreach projects. The group hopes to donate a radiation machine to the clinic. (Submitted photo | For The Compass)

The many needs in Honduras led to the expansion of the Holy Rosary Human Concerns Committee to include an adult support group. The second major task was finding and shipping a mammography machine to a new cancer center in Honduras in 2006.

“The cancer rate there is high,” said Whorrall. “They still use insecticides and pesticides that we used 40 years ago when growing their vegetables and food. They have way abnormal amounts of cancer and mostly in women. They requested a mammography machine.”

Froedtert Hospital in Milwaukee donated a machine. The shipping container had extra space, so the committee filled it with additional supplies.

“We took out all the doors and equipment from doctors’ offices and packed the container,” said Brandon Balazs, 16, a member of human concerns committee. “It’s amazing how many people are donating to help out the people in Honduras. It makes me think about how good we have it here.”

Balazs said he never thought about outreach to another country until he was a student in Whorrall’s religious education class.

“He told us about his trips to Honduras,” said Balazs. “Once I started helping out I felt like we were making the world better for them. It’s a good feeling. It’s something we can be proud of.”

The container was stuck in customs for three months and when it arrived in Honduras, it could not be used for another three months until a mammography technician was found. Seventy women have had mammograms since and five cases of cancer were discovered during the first month of operation.

Whorrall traveled to Honduras in March of 2009 with committee members Jean Vogel, Ron Reese and Judy Woelfel. The goal of the trip was to look for new projects, but the group spent much of their time doing television, radio and newspaper interviews about their support of the cancer center.

“We were on the six major TV stations,” said Whorrall. “People would call in to thank us. It was very touching, but we really didn’t get time to visit the poor.”

Vogel, religious education director at Holy Rosary, and Reese served as translators on the trip. Whorrall praised Woelfel for keeping names, paperwork and money in order for the group.

“When Dave wanted to expand it to include adults, I wanted to make sure I could represent the religious education department,” said Vogel. “It’s a beautiful cause and rewarding to have such an influence on people who are so far away. Sometimes we think we are inhibited by where we are, but people can do anything if they come together and work together.”

The human concerns committee is now looking for a radiation machine for the cancer center. A Cobalt-60 machine is likely the most feasible, said Whorrall. Linear accelerator machines, which have replaced the Cobalt-60 models, cost millions of dollars.

“They need to be able to treat cancer outside of surgery,” said Whorrall. “The radiation machine will serve 7.1 million people. They need any kind of imaging units, any kind of surgical equipment. They depend on us for every piece of equipment.”

The human concerns committee, which continues to raise money through fund-raisers including a recent brat fry and car wash, has also worked on methods to help people in Honduras to make their own compost. Progress in gardening will help in the fight against cancer, said Whorrall.

The group may look to outreach in other countries in the future, but Honduras will remain a priority, said Vogel.

“The people we met in Honduras are a blessing,” she said. “In some charitable efforts you don’t know where the money is going. Fernando, the director, is the person people go to for help. Everything we send down there helps so many people through him. If they cannot use something we sent, they will find someone who can use it.”