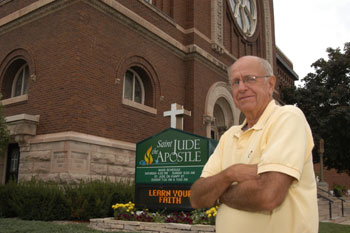 Nigl’s parents, Rudy and Josephine, were faithful members of St. Vincent, and Rudy Nigl ushered there “his whole life,” Ron Nigl said. His parents taught him about giving back to the church.

He started serving in grade school at St. Vincent. “We always had a Mass every day,” Nigl said. “When I was in grade school, they had Masses at 6 or 6:30 a.m.” He and a friend always signed up to be servers at the 6 a.m. Mass. “That way, we didn’t have to go to the children’s service at 8. You couldn’t eat before Communion. When Mass was over, we all went to class and then had breakfast at the school.”

Nigl served Mass at St. Vincent until he was 21, and his father got him going as an usher while he still was a teenager. He has continued ushering ever since at the St. Vincent site, even now when it has become a part of the consolidated St. Jude Parish.

“When you grow up with (serving the church), it stays with you and it helps to have a life in the Catholic Church,” Nigl said. “I enjoy ushering. I enjoy meeting people in the back of church and meeting people new to the parish. And I’m a good talker.”

He said ushers are important in helping make ser- vices run smoothly. They serve as greeters; they find places for people to sit if the pews are full; they are available to help if there is an emergency; and they take up the collection, “which is very important,” he said.

“At the St. Vincent site, we’re still active and we still have meetings,” Nigl said. “We have a chili dump, fish fry and a picnic.”

The ushers also present an “honor guard” when an usher passes away, according to Nigl. They dress in the “usher’s uniform” of black pants, a white shirt and a suit coat and line up along the aisles of the church in honor of their comrade.

“We try to get the young people involved in the church,” Nigl said. “It can lead not only to ushering but to being a minister of some type in the church. If you start them young, it does help. It gives something to younger people.”

Some women also now are involved in the ushers club, he said.

Nigl started working at his father’s business, Rudy’s Shoe Rebuilders, when he was 13. “I used to hitchhike into town to go to work. I helped him out all my life,” he said. People really connected with the store’s slogan – “Let Rudy save your sole” – that was put into place when the business opened in 1928. It reflected the way the business and the family was run, Nigl said.

He said that when his father died in 1985, it was the largest funeral the funeral home had ever coordinated. There were 650 to 700 people lined up out into the streets.

“It was unbelievable how he touched more lives than some ministers,” Nigl said. “He had some effect on people’s lives.”

He said his father taught him to be honest. “‘You can’t lie to the people. You gotta give them a good product,'” his father would tell him.

Nigl carried that work ethic into his maintenance work for the Oshkosh Area School District and the athletic department at the University of Wisconsin-Oshkosh. He still works about 12 hours a week at McCar-thy’s Shoe Repair.

He and his wife, Nancy, are active volunteers for the parish, taking charge of the annual silent auction for the past seven years, working as sacristans and extraordinary ministers of holy Communion. They also oversee the parish’s food stand at the EAA Fly-In Convention.

“I was very fortunate to have a wife where faith meant you go to church every Sunday,” Nigl said. “You have to have faith. I pray a lot. When I’m driving into town, I always say some prayers for my grandchildren, my family, my country. You gotta have faith, something to grasp. When things are a problem or you have troubles, you’ve got to pray to the man upstairs. I do pray for myself, that I’m a better man, husband and grandpa.”