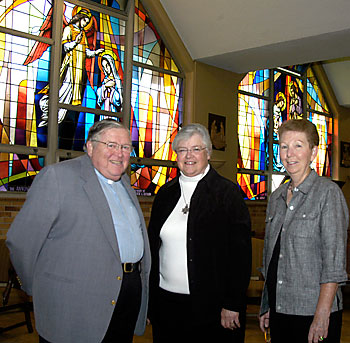 On Sunday, Oct. 4, at 1:30 p.m., Fr. Stingle plans to join the parish and Bishop David Ricken for a 50th anniversary Mass at St. Gabriel. A reception will follow. All former parish members are invited.

“There’ve been a lot of good people who have worked here over the years,” said Fr. Richard Allen, the current pastor. “We can identify the priests and sisters who have served at a parish, but a lot of (lay) people have been part of it, too. It’s the people who make a parish go.”

One of those people is Theresa Rusch, parish secretary and co-chair of the anniversary events. She and her husband have been parish members since 1961.

“When you’ve been here that long,” she said, “it’s like a second home. You feel ownership. I’ve worked here for 30 years and we really enjoy (being part of the parish.)”

That sense of ownership is something Fr. Stingle noticed from the very first parish meeting on July 6, 1959.

On that first June day in 1959, Fr. Stingle looked out at a 10.5 acre cornfield where he was to build for 550 families. The first parish Masses were held in the basement of St. Margaret Mary Church. On Easter Sunday, 1960, ground was broken for St. Gabriel’s church and school. “It was snowing,” Fr. Stingle recalled.

By March 24, 1961 (Palm Sunday), he celebrated the first high Mass in a church that can seat 1,000. He recalls how the people, in what they called “Diaper Alley” since most of Neenah’s west side at that time were young, working class families, helped build that church. For example, Lyle Jacob, a member of the first parish council, built the aluminum Communion rail and entrance door piece of the “Hail Mary.”

The rail is gone, but the entrance verse still welcomes all to the church, which was extensively updated two years ago. A 1996 building project added a gym, parish office complex and early childhood center. In 2001, a carport was added.

“I told the architect I wanted a church without pillars. I wanted it wide open,” said Fr. Stingle. “And that’s what we got.”

Another innovation that remains popular is the annual picnic, called the Round-up. Fr. Stingle chose that Wild West name in 1959 “because we were on the west side of Neenah.” It was the first fund-raiser for the parish and remains one of the most lucrative.

The Franciscan Sisters of Christian Charity, led by Sr. Donna Marie Kessler, a Neenah native herself, started the school.

“We had 439 students in 10 classrooms,” Sr. Donna Marie said. “It was the first school where I was principal and I was a teaching principal. I had eighth grade.”

There were nine sisters and two lay teachers. One was Sr. St. Philip, a musician, which Sr. Donna Marie said was unusual and a great addition to the school.

“One of the first days, we had a raising of the flag,” Sr. Donna Marie said. “And Sr. St. Philip already had a little band put together that played. Everybody was just floored that she could have those children playing on the first days of school.”

The sisters also trained mothers as volunteer teachers for the Monday afternoon religious education programs, which “had loads of children,” according to Sr. Donna Marie. Enrollment kept growing to a peak of 585 students in 16 classrooms in 1966-67.

Theresa Rusch sent her three children there. She’d do it again, too.

“My oldest son said to me one time that he feels if he had a choice for his own children, he’d send them to a Catholic grade school because it started them out right.”

After 50 years, that good start is borne out in a parish Fr. Allen calls “a Vatican II church,” with lots of community involvement, ecumenical awareness and a concern for social justice.

It’s a sentiment echoed by Sr. JoAnn Serwas, pastoral associate, who is co-chairing the anniversary celebrations.

“People here are a committed group,” she said. “We suffer from the same things every Catholic parish does; those are the signs of the times. Yet our folks are very willing to step forward. I would say one of our strongest suits has been our outreach to the community. These folks are very willing to get involved. We house the homeless shelter here (as part of the Fox Valley Warming Shelter). We do a lot of work with COTS (shelter) and Community Table. We do a lot of feeding people and St. Vincent de Paul is very active.”

It’s something Fr. Allen hopes his parish will continue into its second half-century.

“I hope they realized we are part of something bigger, wider, the realization that what we have is still in formation. We don’t know where it’s going to go, but it’s going to be reaching out in ways we don’t anticipate.”

As for Fr. Stingle, who made a thanksgiving visit to St. Gabriel on June 18, the anniversary of his appointment by Bishop Stanislaus Bona, he has great faith in the future. Fr. Stingle said that, when he looks back, “it is unbelievable how people came forward to work. It just confirms that God gives you all the help you need.”