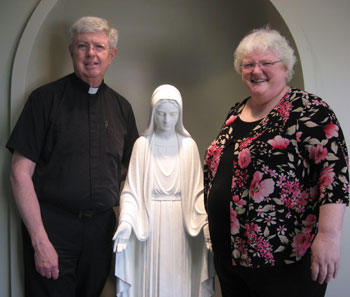 The parish has been celebrating this momentous occasion, with the theme “Remembering, Celebrating, Envisioning,” since the first part of the year. The kick-off event was a New Year’s Eve Casino Night. A parish cookbook was printed, a special logo designed, a DVD of the parish’s history was created and a Mardi Gras family breakfast and St. Patrick’s Day dinner were served. The concluding event is a Mass of Thanksgiving, presided over by Bishop Robert Banks, on Sunday, Sept. 13, at 3 p.m.

According to Fr. Mike O’Rourke, pastor, the first assigned pastor at St. Mary was Fr. Louis Dael. At the time of his leadership, the majority of the parishioners were of Irish descent, having emigrated from Ireland during the Irish Potato Famine in the late 1840s.

“We originally had a wood frame building (for the church),” noted Nancy Woods, who is the liturgist for St. Mary’s and chairperson of the 150th celebration committee. The building was completed in October 1860. In 1862, Fr. Dael purchased several adjoining lots to the church to accommodate a rectory and a small school. Three years later, land was purchased just west of the city for a parish cemetery.

By that time St. Mary Parish included members of Irish, German, French, Belgian and Dutch descent. “In 1867 the bishop gave permission for the German inhabitants of the area to have their own German-speaking parish,” said Fr. O’Rourke. That was the start of St. Joseph Parish, located just a few blocks from St. Mary’s. The German and Dutch parishioners worshipped at St. Joe’s and the French, Belgian and English-speaking members were assigned to St. Mary’s.

While the church operated continuously through all the years, it was a different story for the school. “The school closed then reopened later when the parish was more established,” said Fr. O’Rourke. The second school was in operation for 18 years before it closed its doors in 1888.

The present brick church building was constructed while the Servite Fathers were overseeing the parish, from 1872 to 1875. Several parishioners, in a demonstration of their zeal for the church, mortgaged their homes and land to procure the funds to erect the new structure. “I think most of the people that were here early were salt of the earth. They had farms,” said Fr. O’Rourke. “It was not a parish that had Daddy Warbucks or a few of his friends who were behind the scenes, keeping the parish afloat. They were just ordinary folks.”

A new school and convent were erected in 1889. From 1891 to 1899 St. Mary’s had a four-year high school, but that closed for lack of funding. An addition expanded the grade school in 1924 and in the early 1950s the present school was erected on the site.

Two former parishioners were quite famous in American history. John Bradley, the United States Navy corpsman who raised the American flag over Iwo Jima during World War II, belonged to St. Mary’s during his youth. Joseph McCarthy, the Wisconsin senator whose name will forever be linked to the communist “Red Scare,” was a parish member and was buried in St. Mary cemetery after his death in 1957.

In 1986 Fr. O’Rouke became pastor and the church is thriving under his and his staff’s leadership. The parish currently is home to 1,242 families, which represents 3,196 members. The remarkable number is the 1,072 parishioners who are involved in some form of pastoral ministry.

The parish’s appeal could be the warmth it exudes, said the pastor. “I think there’s a feeling for the parish,” said Fr. O’Rourke. “I’ve had people walk in and say, ‘It’s so welcoming, I feel like this is home.’ The church itself has more of a church look to it. It’s not just walls and a floor and a ceiling and an altar. There’s a sense that this building is visually supportive of our faith.”

Fr. O’Rourke makes a point at every Mass to thank people for getting to church. “I don’t ever want to take that for granted,” he said. “The morale is good here. People who come feel welcome. Plus there’s a real strong sense of ownership.”

The pastor has one major hope for the future of St. Mary Parish. “I hope I’m not the last pastor of this parish. I want the next priest to be the best one we’ve ever had.”