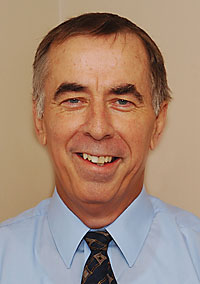 Kuick, 56, died Sept. 21 after a battle with cancer. He joined the Diocese of Green Bay staff in 1975 as a television and radio producer. In 1977, he was appointed communications director. His many duties included serving as general manager of The Compass.

“He was an advocate of The Compass newspaper, he organized and produced the Sunday TV Masses, he launched several call-in radio programs that aired on commercial radio, he helped diocesan leaders gain confidence for media interviews, and he helped the diocese step into the online world by shepherding the diocese’s first Web site in 1997,” said Renae Bauer, assistant director of communications. “Through it all, he kept in mind the audience and their need for an understandable and valuable message.”

Tony Staley, retired editor of The Compass, worked for Kuick for 15 of his 18 years with the newspaper.

“I could not have asked for a better boss,” said Staley. “He was both supportive and helpful. He trusted me and allowed me to edit the paper without interference. At the same time, he was there to consult with and to answer any questions that I had.

“I was always amazed by all that he knew and all that he did as communications director, a job that I always thought was extremely challenging,” he added. “Everything he did was done thoroughly and professionally, and he always seemed to know exactly what people would want to know.”

Kuick, a Kenosha native, also wrote the policies on sexual abuse for the diocese and, in 2003-2004, served as the diocesan contact person for those who suffered abuse.

“Tony was able to clarify, summarize and clearly define issues concerning safe environment,” said Ann Fox, diocesan assistance coordinator. “He was one person who saw the larger picture and cared deeply about both victims and survivors of abuse, their families, and the perpetrators. Many times his genuine sense of humor lifted depression and helped others to see the goodness of life despite the challenges and pain.”

Jim Hogan, former diocesan personnel director, recalls working with Kuick on many projects including facilitating the installation Masses and celebrations for Bishops (now Cardinal)Adam Maida and Robert Banks along with Franciscan Sr. Ann Rehrauer, current director of evangelization and worship and former chancellor for the diocese. Kuick was more than a co-worker, he said.

“Tony was a good man,” said Hogan. “I have only told that directly to two people in my life. I told Bishop (Robert) Banks that he was a good man at his farewell, and I told Tony that when I visited him last week. I remember when I was out sick, for a period of time; he would stop by the house and bring me my mail from the office. He wanted to keep me informed. He was a good friend.”

Kuick also assisted with the installations of Bishops David Zubik and David Ricken. He produced the annual Christmas Eve Mass broadcast live from St. Francis Xavier Cathedral, served on the Bishop’s Advisory Council and worked closely with the bishops through media relations.

“Tony was the first person to welcome me when I came to Green Bay and I always knew I could count on him,” said Bishop Banks. “He handled diocesan communications and all his responsibilities so well and so smoothly. And he was always behind the many good times that made the diocesan staff like a family. He is missed.”

In his spare time, Kuick enjoyed golf, other sporting activities, cards and playing the piano.

Fr. Kabat, who will deliver the homily at the funeral Mass, and Fr. Dean Dombroski were not only close friends but Kuick’s golf partners.

“We were kind of the Three Stooges,” said Fr. Kabat. “I met Tony 30 years ago and we became fast friends. I was working with the Tribunal and he was with communications. We met in the cafeteria. We played golf together and softball. As we got older, we stuck to golf.

“It was an incredible journey for Tony,” he added. “We were all praying for him. We were all praying that that he would beat cancer. While we may feel that our prayers were not answered, they were answered in the sense that throughout this journey he stayed Tony. He maintained his sense of humor and he continued to truly care about other people. He was a great man. He taught us how to live and how to die.”

“(Tony) embraced his illness with tremendous courage and was so appreciative of all the care and concern showered upon him these past several months,” said Bishop Robert Morneau. “His love for his family and grandchildren was admirable; his commitment to the church constant. We are indebted to Tony for witnessing to us what discipleship is all about: service, self-giving, sacrifice.”

Kuick is survived by his wife, Debbie; his daughters, Olivia (Jason) Kelley and Melissa Kuick; his son, Greg (Rebecca) Kuick; his granddaughters, Grace and Morgan; his sister, Marilyn; and his brothers, Paul, Mike, Kenny and Roger. The funeral Mass will be celebrated at 11 a.m. on Sept. 25 at Resurrection Church, Allouez, with Bishop David Ricken as the principal celebrant, Fr. Kabat as homilist and Fr. Dean Dombroski concelebrating. Online condolences may be expressed at www.cotterfuneralhome.com.