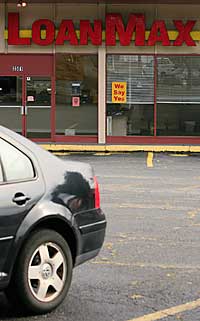 The Wisconsin Catholic Conference is urging residents to support Assembly Bill 392, which was introduced Aug. 26 by Rep. Gordon Hintz (D-Oshkosh) and Assembly Majority Leader Thomas Nelson (D-Kaukauna). The bill limits the annual percentage rate for all lenders to 36 percent. A.B. 392 has 43 co-sponsors in the State Assembly and 15 in the State Senate.

“The everyday experience of staff at Catholic Charities and that of parish-based volunteers with the Society of St. Vincent de Paul councils offers powerful testimony that payday loans impose great hardship on families who already struggle financially,” said John Huebscher, executive director of the Wisconsin Catholic Conference. “Our laws must do more to protect the poor in this area.”

Wisconsin is one of only two states that do not regulate the payday loan industry. Payday lenders merely need to obtain a license from the Division of Banking in the Department of Financial Institutions. The state has no authority to regulate the amount of the loans, the interest charged, or the number of times a loan can be “rolled over.” According to the WCC, payday lending in Wisconsin has mushroomed in the past 15 years. In 1995, the state licensed two payday lenders. Last year, it licensed 530.

In Green Bay, Bobbie Lison, operations manager for Catholic Charities, said budget counselors work with clients struggling with financial issues. She said about one-fourth of their clients (around 100 people a year) have secured payday loans.

“Sometimes it’s to pay bills. Maybe they’re going to be disconnected (from utility service) and they need a couple hundred dollars to avoid that,” she said. “Sometimes it’s to buy food or clothes. It could be medical reasons.”

People who take out payday loans are often unable to pay off the loan when it is due, said Lison. This leads to more debt.

“People don’t come in (for budget counseling) with one payday loan,” she said. “They come in with six, seven, eight payday loans. What happens is they try to pay off the one payday loan and they can’t. So they end up going to another one. Before you know it, they’ve got many loans.”

She explained that when someone takes out a loan, they write a check that includes the amount borrowed plus interest. When it is due and the borrower cannot repay the amount, they are allowed to roll over the loan, paying only the interest due.

“You get trapped into this cycle and all of your money is going to these payday lenders to roll them over,” she said.

Regulating the payday loan industry is difficult because it has powerful lobbyists, said Lison. In Wisconsin, payday lenders contributed more than $140,000 last year to Gov. Jim Doyle and candidates for the Legislature, according to the Wisconsin Democracy Campaign. That was more than twice the amount payday lenders contributed in any previous year.

In addition, more payday lenders are now online businesses located outside of the country.

Huebscher said Catholic social teaching requires Catholics to exercise an “option for the poor,” in their personal lives as well as in the public policies they support.

“It is not only about helping the poor, which is what groups like Catholic Charities and the Society of St. Vincent de Paul do every day,” Huebscher said. “An option for the poor means we do not abandon the poor or ignore their plight when we make laws and regulations. We cannot allow largely unregulated forms of predatory lending to exploit their vulnerability.”

MADISON — The director of Catholic Charities of the La Crosse diocese joined several other experts in the State Capitol on Sept. 16 to make the case for strong regulation of the payday lending industry in Wisconsin.

Deacon Richard Sage, whose agency operates family financial counseling services across the 19 counties of the diocese, told more than 50 legislators and staff of the hardship that individuals and families endure when they are “ensnared in unregulated payday loans.”

He quoted a mother who had to take several days off work to care for a sick child. Since the leave was unpaid, “in a very short time I started to get behind on bills and so I took out a $400 payday loan,” the mother explained. “I’ve not been able to pay the loan off but have been paying them $88 every two weeks. I’ve paid them five or six times and I still owe them $400. Can you help me?”

“While payday loans’ quickness and easy accessibility make them attractive to people who are suffering from a cash-crunch, the terms are set so that borrowers most often cannot pay off the loan on payday when it’s due without leaving a large gap in their budget,” Sage explained. “It almost seems that these short-term payday loans are designed to catch working people or those on a fixed income, such as Social Security or a disability check, into a long-term cycle of debt.”

“Their household income runs $650 short of making even the basic payments. She’s afraid of losing their home,” Sage added.

Under current law, while the Department of Financial Institutions (DFI) must license all payday lenders operating in the state, it currently does not have the authority to regulate the amount of a loan, the interest charged, or the number of times a loan can be “rolled over.” Under this limited regulation, payday lending in Wisconsin has flourished in the past 15 years. In 1995, the state licensed less than ten payday lenders. Last year, it licensed 530.

Sage asked legislators to support Assembly Bill 392, which prohibits payday lenders from assessing finance charges that exceed 36 percent per year. The bill also gives the DFI the authority to enforce the new regulations.

Deacon Sage concluded his remarks by making a moral argument for regulation. “Catholic Charities is rooted in the rich tradition of Catholic Social Teaching that calls us to stand in solidarity as one human family. We are our brothers’ and sisters’ keepers and are dedicated to the pursuit of justice and peace. Once profit becomes an exclusive goal, if it is produced by improper means and without the common good as its ultimate end, it risks creating poverty and destroys the development of people.”

• borrowers must either repay the loan in full (in a single balloon payment) within a short period, or else renew the loan by paying an additional fee or by taking out a new loan.

According to the CRL, the experience of other states, like North Carolina and West Virginia, shows that the only way to effectively regulate payday lenders is to cap the interest rate they are allowed to charge.

Even though capping the rate at 36 percent represents a doubling of the rate allowed prior to 1996, when Wisconsin law only permitted rates of 18 percent or less, it would still level the playing field for responsible lenders (including many banks and credit unions) and save Wisconsin residents over $1 billion.

Michael Trepanier, executive assistant at the Wisconsin Department of Veterans Affairs, also spoke in favor of AB 392. He explained that in 2007, the federal government instituted a 36 percent cap on the majority of payday loans to active duty service men, women, and their families. This was necessitated after the Pentagon found that payday loans undermine military readiness and cohesion.