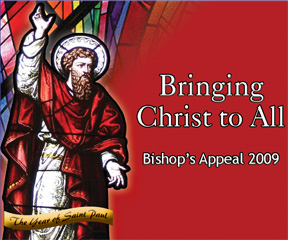 Fifty-two parishes reached their Bishop’s Appeal goals in 2009. Fifty percent of contributions received beyond the goal are returned to the parish.

In addition to raising funds, the focus of the Appeal was to connect the faithful to the services supported by their gifts, said Diedrich.

“You can look at the 17 percent, $809,000, of what was raised that is going to assist programs offered by Catholic Charities,” he said. “Catholic Charities has eight offices in seven counties serving 41,000 people. The financial struggles people are facing due to the economy have led to a 23 percent increase in the number of people asking for help from Catholic Charities.”

Requests for budget counseling within Catholic Charities increased by 40 percent, bankruptcy workshops by 30 percent and mental health counseling by 31 percent.

“What we are able to achieve through the Bishop’s Appeal is such a blessing for people who otherwise wouldn’t have anywhere else to turn without Catholic Charities,” said Diedrich.

The diocesan Department of Education receives more than $1 million from the Appeal, 87 percent of its operating budget. The Appeal supports the 12,000 students in the Catholic schools, 25,000 in religious education programs and more than 1,000 adults who attend faith formation sessions.

The Appeal also supports Stewardship and Pastoral Services, Evangelization and Worship, The Compass, the Marriage Tribunal and Ministry Formation, which assisted 33 people who were either commissioned or ordained for church leadership roles in 2009.

Donations are still being accepted for the 2009 Bishop’s Appeal. The 2010 campaign begins in February. The theme for the new campaign will build on the “Year of the Priest,” declared by Pope Benedict XVI on June 19, 2009, and concluding with an international gathering of priests in Rome, June 9-11, 2010.

“The focus is on the call to serve,” said Diedrich. “The Appeal video will feature interviews with priests sharing why they feel the Bishop’s Appeal is important. The priest will then introduce a lay person from his parish. The story of that person’s call to serve will be highlighted.”