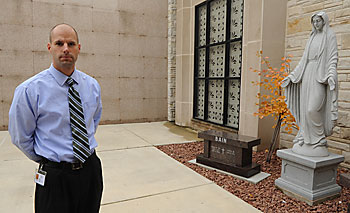 Steve Gooding, administrator of Allouez Catholic Cemetery and Mausoleum, stands in front of a patio crypt, where the unclaimed cremated remains of 65 people are now located. (Sam Lucero | The Compass)

“While we did not initiate the media attention, it fortunately has become a vehicle driving people to come forward and claim their deceased loved ones, ultimately providing them with a reverent resting place, whether that be here at Allouez or elsewhere,” said Gooding. “We are providing a necessary, valuable service to the local funeral directors and the entire community.”

“To the best of my knowledge, the cemetery began accepting the remains in the 1970s when the first mausoleum buildings and chapel were constructed,” said Gooding, who has been administrator for a little over two years. “Included in the group are individuals who passed away as early as 1941.”

“This is the first time any information about the unclaimed remains was released for public consumption,” he noted. “The basic information for the story, which appeared in the Green Bay Press-Gazette, was provided by the Brown County’s Medical Examiner Office.”

But as a result of that publicity, five remains have been picked up by local individuals. “While this is redeeming, we cannot be truly satisfied until all have been reunited with family and friends,” he said. The storage/retrieval fee is $50.

He said he wasn’t aware of the unclaimed remains until quite some time after he took the position of administrator. “Obviously, it is not something we deal with on a regular basis. Immediately thereafter we began internal discussions about potential courses of action,” he said.

Until recently the remains were stored in a utility closet at the mausoleum.

“The unclaimed remains have now been respectfully transferred to their permanent destination, a patio crypt in the mausoleum,” said Gooding. “The location selected provides ready access for staff members in the event remains would need to be retrieved and ample space should there be an influx of additional remains in the future,” he said.

Just who are the people who remain unclaimed?

Gooding said there isn’t a lot of history to share on these people, but added they can’t be stereotyped.

“However, based on the information we do have, the unclaimed constitute an extremely diverse compilation,” he said. “They span the spectrums of age, race and religious affiliation. It would be easy for someone to falsely assume a stereotype, perhaps that these individuals were in some way socially and/or economically inferior, but that would be unfounded. In fact, we have people who were champions of business, school and community leaders, even medical professionals.”

Most of the remains were brought to the cemetery prior to 1990, he said.

“Since then, we have received one or two per year on average, and have had multiple year stints with none,” Gooding noted. Only one has been received this year.

So why didn’t the facility contact family members directly through the years about the unclaimed remains?

“We didn’t feel it was our place to proactively track down and contact family members,” said Gooding. “We in no way wish to shame or cause indignity to anyone. However, we are pleased this situation has become more transparent and that there is an opportunity for people, if they so choose, to initiate the process themselves.”

The Allouez Catholic Cemetery and Mausoleum is the only cemetery in the area that provides storage for unclaimed remains.

“I’d like to think we were entrusted to take on this responsibility because as a Catholic organization we operate according to higher principles and will do right by our fellow faithful of northeast Wisconsin,” said Gooding.