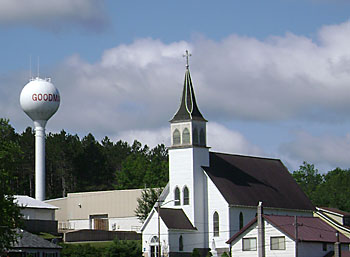 St. Joan of Arc Church in Goodman is pictured in a recent photo. Parishioners at the Marinette County parish gathered for the church’s 100th anniversary on Sept. 20. (Submitted photo | For The Compass)

“I liked it there. It was such a calm, quiet place,” said Sr. Germaine, who taught there from 1961 to 1966. “It was rugged. We lived down the hill and went up that hill every day to school, carrying all our things. But it was delightful. People were so kind. Like a big family.”

At the anniversary, she reconnected with many of her old students, who were amazed at how the sisters remembered their names after more than 40 years.

One of Sr. Germaine’s seventh and eighth grade students was Ella Engel, who was born, raised and married in the parish. She and her husband moved away for a time, but have been back for 10 years. Engel sings in the choir and served on the centennial committee.

She said the best thing about St. Joan of Arc Parish is “the community, the closeness, the fact that most of us have grown up together. We went to Catholic school together. There’s a closeness.

“It’s got such a nice feel that you don’t find in a bigger church,” she said. “For instance, we know when it’s somebody’s birthday. So the choir sings ‘Happy Birthday’ to them.”

Deacon Jerry Cross, parish director, has been in Goodman since February. He also serves St. Stanislaus Kostka in Armstrong Creek. He and his wife, Marianne, came from Menasha.

“The people here are so welcoming,” he said, adding that it isn’t long before “you get to the point where you recognize everybody’s car on the road, and you’re waving at everybody.”

St. Joan of Arc was founded by French families who had come to work in the logging and lumbering business of the north woods. The town of Goodman, named for the owner of the Goodman Lumber Company, was founded in 1908. The land for the church was donated by the company, as was land for the school later on.

The first pastor was Fr. M.J. Coutlee, who traveled around the area on a railroad handcar and stayed at the Goodman Hotel. In 1913, the wood frame church that is still used was built, with the lumber bought from Goodman Lumber. Donations came from Bishop Joseph Fox of Green Bay, Goodman Lumber and the Catholic Church Extension Society, which had just formed in 1905 to help rural areas of the United States. By 1916, the mortgage was paid off by parish members.

“It’s a very warm and close community,” said Msgr. Koszarek, who also served as pastor in 2004-2005. “They are proud of their church. They are quite active and the liturgies are very vibrant.”

An interesting note is that the parish was founded under the patronage of “St. Joan of Arc” even though the Maid of Orleans was not canonized until 1920. She was beatified in 1909, the same year the Goodman parish was founded. This history is a point of pride for the parish. People drive 30 minutes or more one way to get to work or school. Some even drive to Escanaba, which is 60 miles away.

“They are committed to the area,” said Deacon Cross. “You can see the bond in households with families is very, very, very strong. Take the high school football program – it involved both counties here (Marinette in Wisconsin and Menominee in Michigan). Goodman hooked up with Pembine and Niagara so that, together, the three schools can have one team. They play the games in Niagara – that’s 25, 30 miles. You should see the number of families that, even if their sons are not playing that night, will go up and support the team.

“And there is nothing scheduled around here on Tuesdays or Thursdays,” he added, “because those are basketball nights. They close down businesses to go and support teams.”

It’s a hallmark of today’s St. Joan of Arc that Sr. Germaine remembers from 44 years ago. “There were so many things (at the centennial), so many changes. But the basics, they stayed the same.”