Helping others is at top of his menu 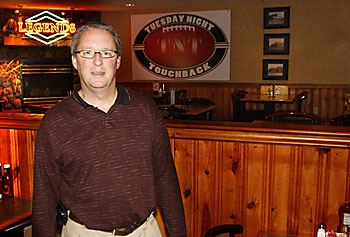 Being chosen as the Silver Knight Award recipient was quite the surprise for DeCleene. He had no idea that he was nominated and doesn’t believe his work needs any recognition.

“I was very humbled when I found out,” DeCleene said. “At first I didn’t think that I did anything that should be recognized. But then I took it as a way that I can say thanks to all those who have helped me through everything.”

DeCleene grew up in De Pere, graduating in 1982 from De Pere High School. After attending college and briefly working for Marriott, DeCleene and his wife moved back to De Pere to raise a family and enter the restaurant business. The DeCleenes have five children, four boys and one girl. His brother Kevin is a deacon at St. Francis Xavier Parish and St. Mary Parish, both in De Pere.

DeCleene is the owner of the Swan Club, the Legends franchise, Caliente, Black and Tan and the Chicago Street Pub. In early 2009, DeCleene was named Outstanding Restaurateur of the Year by the Green Bay Chapter of the Wisconsin Restaurant Association. DeCleene began his career in the restaurant business when he was 14 working at the Swan Club, a facility he now owns.

DeCleene’s faith is a very important aspect of his life. He lives out his faith by using his talents, resources and time to help those in De Pere and surrounding areas who are less fortunate.

“It’s a family notion that is it better to give than receive,” DeCleene said. “That is something I was taught when I was a child, as was my wife. Now we instill it in our children.”

DeCleene has been a volunteer or made donations at a variety of organizations throughout the area including New Community Shelter, Notre Dame and Our Lady of Lourdes Catholic schools, St. Mary Parish, the CP Center, Legends/Cellcom Charity Golf Outing and the De Pere Rotary Club. A Rotary Club member for more than 20 years, he oversees a lot of fund-raising.

In the early 1990s, DeCleene, along with close friend and 1997 recipient of the Silver Knight Award, John Franken, oversaw the St. Mary annual church picnic. While he has handed the reins to other parishioners, DeCleene helps out where he is needed.

In DeCleene’s nomination letters for the award, he was described as a true supporter of philanthropy who has shared his gifts with humility and generosity. DeCleene will receive the Silver Knight Award during the annual De Pere Community Night dinner on Oct. 27 in the Sensenbrenner Memorial Union at St. Norbert College.