Mass is source, summit of his life 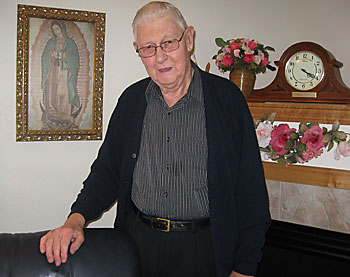 Having worked different shifts at Thilmany Paper in Kaukauna for 37 and one-half years, DeBruin appreciates having the free time to attend Mass more often since his retirement in 1987. His devotion to the church began as a child. “I was an altar boy until the cassock got too short for me,” said DeBruin. “My home parish was St. John’s in Seymour. My brother Orvell has been a deacon there for 30 years.”

DeBruin and his wife Millie have been married for 62 years. They have six children – four girls and two boys, one of whom is deceased – and 11 grandchildren. “The first daughter is a nun, Sr. Diana. She just got elected second-in-command for (the School Sisters of) St. Francis of Assisi in Milwaukee.” Their children attended St. Mary School in Kaukauna. While they don’t all live in the area, they are all practicing Catholics, he said.

Through the years, DeBruin has volunteered in many capacities at St. Aloysius. “I don’t think there were many committees I missed being on.” He’s also volunteered at other organizations.

For five years he was on the board of directors for the St. Vincent de Paul Society. For 15 years he volunteered for the Visiting Nurses Association, doing respite care. “I took care of their patients. You stay with someone so their care provider could have a day off. You can’t stay with somebody 24 hours a day, seven days a week. It would drive you up a wall.”

For years, DeBruin distributed Communion at St. Aloysius. Even though he no longer distributes Communion at Sunday Mass, he is busy with that ministry the other days of the week, making sure that parishioners from all three St. Katharine Drexel sites receive Communion if they can’t make it to church.

“Monday I’m at the nursing homes, Tuesday I’m at the hospitals, Wednesday I try to keep open if you miss another day, Thursdays I distribute Communion at St. Paul’s Elder Care in Kaukauna and to the shut-ins,” he said.

Mass will always be near and dear to his heart

“I’m closer to God when I go to Mass every day,” he said, his voice choking up. “There isn’t anything better that you can do. There are four keys to heaven: the Mass, the Way of the Cross, the scapular and the rosary.”

Living a life centered on his faith, Mass and Communion helps DeBruin set a good example for the people in his life and may inspire them to give of their time as well, he said. “When they see somebody doing something they think, ‘Hey, maybe that would be all right for me too.'”