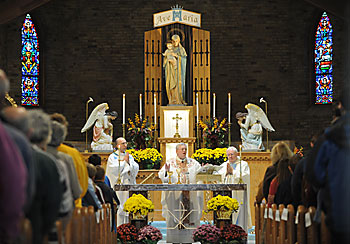 Bishop David Ricken is joined by Fr. John Doerfler, left, and Fr. Tony Dolski at the altar during a Mass Oct. 9 marking the conclusion of the Shrine of Our Lady of Good Help’s 150th anniversary. About 350 people attended the closing liturgy. (Sam Lucero | The Compass)

Bishop Ricken announced the rededication during his homily at a Mass in the shrine’s chapel. Approximately 350 people turned out for the closing Mass, with many standing along the chapel’s entrance and gathering area. The assembly included students from Holy Trinity School in Casco and St. John the Baptist School in Howard.

“We want to make sure that we pass on this wonderful legacy that has been given to the diocese to the next generation,” Bishop Ricken told the congregation after acknowledging the presence of Catholic school youth.

Bishop Ricken called the shrine’s 150th anniversary “a wonderful year of many graces.” It was an opportunity to celebrate “the story of Sr. Adele Brice and the beautiful things that the Blessed Mother has done, the many miracles worked through her intercession here over these many years,” he said.

On Oct. 9, 1859, the Virgin Mary reportedly appeared to Adele Brice, a Belgian immigrant. The woman, who identified herself as “the Queen of Heaven,” appeared to Brice two more times that month. Her message was for Brice to educate the community’s children, whom she said were losing their faith through neglect.

Brice, at age 27, devoted the rest of her life to that cause. She founded St. Mary’s Academy, a boarding school, in 1869, and she formed a lay community known as the Sisters of Good Help. Brice became known as Sr. Adele.

One of the miracles to which Bishop Ricken alluded was the Peshtigo fire, which occurred on Oct. 8, 1871. That night, as fire was destroying farms surrounding the chapel, Sr. Adele carried a statue of Mary around the five-acre perimeter of the chapel grounds. Joined by local residents who sought refuge at the chapel, they continued their vigil until morning, when a downpour doused the flames.

The shrine property escaped damage while everything outside the perimeter was burned. Each year a rosary procession is held Oct. 8 to commemorate what many consider a miracle. An estimated 50,000 to 60,000 people visit the shrine each year.

Bishop Ricken said that while the Mass concluded a year-long celebration, “we are also filled with great hope that the many graces that have been poured out throughout this year will continue to be poured out.”

“I’m convinced that there will be many more graces and miracles poured out of this place and many more people will come in the weeks and months and years ahead,” he added.

Bishop Ricken told the congregation that someone had asked him to rededicate the Diocese of Green Bay to the Immaculate Heart of Mary.

“I’ve been praying about that and initially I thought of doing it on Dec. 8 (the feast of the Immaculate Conception),” he said. “But I thought this would be a tremendous day to rededicate the Diocese of Green Bay to the Immaculate Heart of Mary.”

He said that Pope John Paul II had written a special prayer of consecration to the Immaculate Heart of Mary. After his homily, the bishop recited the prayer and then led the congregation in reciting a decade of the rosary.

Reflecting on the day’s Gospel story of the wedding feast at Cana, Bishop Ricken noted that, just as at Cana, the Blessed Mother “has given orders to her son to pour out special graces on all who have come here.”

Bishop Ricken observed that the shrine’s anniversary took place at a serendipitous time.

“Isn’t it interesting, too, that we just completed the 150th anniversary of the apparition at Lourdes” in 2008? he asked. “This year the Holy Father declared this the Year for Priests and we honor St. John Vianney, who was pastor of Ars and who worked miracle after miracle himself. … His whole life was entirely dedicated to the Blessed Mother.”

“He, too, is Belgian and this area here and this place has very Belgian roots,” added Bishop Ricken.

By rededicating the diocese to the Immaculate Heart of Mary, said Bishop Ricken, “we simply thank the Lord and the Blessed Mother for all the graces they have poured out upon us, upon this diocese, and upon every pilgrim who has come here to pray and be nourished. The Blessed Mother will be special to this place, hopefully forever, and she is definitely a sign of hope to our world.”

The bishop acknowledged the work of shrine directors Karen and Steve Tipps, who have worked at the shrine for 17 years, and Fr. John Doerfler, who serves as the shrine’s rector.

Fr. Doerfler told The Compass that Bishop Ricken has appointed a commission to study the apparitions reported by Sr. Adele. It is the first time a formal declaration on the apparitions has been proposed.