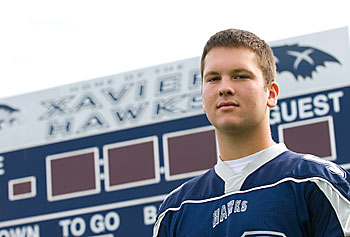 Dave Ramlet, starting left tackle for the undefeated Xavier Hawks, is ranked as the second best high school long snapper in the country by the Kohl’s National Rating System. Ramlet will play at the University of Minnesota next season. (Kasi Koshollek | For The Compass)

Ramlet’s snapping skills earned him an offer as a preferred walk-on at the University of Minnesota. If he wins a starting spot, he will be put on scholarship for the Golden Gophers.

“College scouts usually don’t come to games to look at long snappers,” said Ramlet. “I attended the Kohl’s Camp in Oshkosh before my junior year and performed pretty well. Kohl’s runs a showcase camp. I was invited and performed pretty well at that scholarship camp. I started thinking that I could do this in college. A free education would be pretty awesome. I kept getting mail from schools that were interested in me.”

Ramlet attended several camps prior to his senior season, including college camps at Wisconsin and Minnesota. He said he felt a connection to the Twin Cities campus. When Gophers’ special teams coach John Butler made Ramlet an offer he quickly accepted.

Ramlet began learning his craft as a sixth grader. Long snapping runs in his family. His grandfather, Bill Ramlet, long snapped at Yankton College; his father, Phil, snapped at Shawano High School; and younger brother Bobby, a starting linebacker at Xavier, is ranked first in the nation by Kohl’s among long snappers in the class of 2012.

Work on the trade in the summer is essential to becoming a good snapper, said Ramlet. During the season, he works on it 10 to 15 minutes a day at practice with the team.

“For placekicks, the short distance is more about accuracy and hitting your spots,” he said. “Punting requires hitting it back there quickly and accurately. A lot of it is mental. If you have one bad one, you can’t let that snap affect other snaps. You have to have a short memory.”

Ramlet has been a member of the Xavier varsity football team for four years. As a freshman, he asked Coach Dave Hinkens for an opportunity to display his snapping skills.

“I asked him, ‘Coach, do you mind if I long snap a couple with the varsity?’” he explained. “I did okay. He said, ‘We will put you on the team, do your thing.’”

In addition to long snapping, Ramlet started at center as a sophomore and junior. He expected to do the same this season, but was moved to left tackle.

“It was an adjustment,” he said. “It took a couple weeks to get used to it, but then it came to me.”

Ramlet grew up watching Xavier football. He has embraced being a role model for young fans.

“I remember looking up to players like Kevin Rohrer, who was a great quarterback here,” he said. “He was a great athlete and a great person. I had the opportunity to talk to him a few times. Because of how much I looked up to him and other players, I realize that kids really look up to us.”

The team’s annual Football Camp for Kids with Autism is a special event, said Ramlet. On Sept. 12, the Xavier football players hosted approximately 100 kids along with many of their parents.

“It’s not really X’s and O’s,” said Ramlet. “It’s about interacting with the kids, having them push us over with a blocking dummy and stuff like that. It was a really awesome experience.”

The children ran through a line of Xavier players to simulate the introduction of the starting lineup. They also had lunch with the Hawks and the coaching staff.

“Our coach told us that this is their Super Bowl, so we have to come with energy and show these kids what football is all about,” said Ramlet. “That was a real rewarding day.”

Ramlet, a member of St. Mary Parish in Appleton, also plays basketball and baseball for the Hawks. Xavier has already qualified for the football playoffs and has its sights on a conference title. Winning is the goal, but is not the only measure of success, said Ramlet.

“Success to this team could mean coming together as one and overcoming an obstacle together,” he said. “If we do that, winning will come. One of our mottos is, ‘Take care of the small things and the big things will take care of themselves.’”