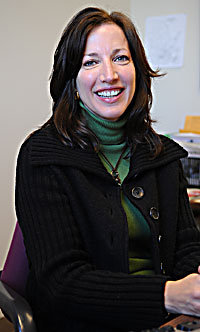 Bauer said that she will take a similar approach in her new position to that of her predecessor.

“Tony knew the art of being cool under pressure,” she said. “It goes back to that adage that you have to have a calm mind in crisis. Tony was very good at that. That’s the one thing I find myself doing is thinking of him when there is a lot going on, just taking a deep breath and focusing on what is the most important thing to get done.”

Bauer’s background includes reporting, editing and managing roles at weekly and daily newspapers as well as overseeing the startup of an intranet portal at a Fortune 500 company. She has a bachelor’s degree in mass communications from UW-La Crosse. As director, Bauer’s duties include overseeing diocesan communications and serving on the Bishop’s Advisory Council and as general manager of The Compass. Bauer filled in for Kuick during his illness.

“What I tried to do when Tony was gone for treatment was to try to make decisions from his frame of mind and be true to what his vision was for the department,” she said. “I don’t see that changing radically. I think there are some things that we could do differently, especially from a general communications standpoint. I think we, as a staff, understand that social media is yet another tool to use. We try to find new ways for people to find that Catholic information that they need or are looking for.”

Bauer has worked closely with the secular media as public relations coordinator and assistant director and will continue to do so as director. Although at times she may be thrust into the spokesperson role for the diocese, it is not her preference.

“Tony and I were always from the philosophy that those who are working closest with the issue or event should be the spokesperson, because they know it much more intimately than he or I would,” she said.

Bauer, a member of St. Bernard Parish in Green Bay, said the “quickly changing landscape of communications” is both the most challenging and exciting aspect of her position.

“Our options to communicate with people seem to change so quickly,” she said. “MySpace was so popular just a few years ago, and now Facebook and Twitter have just exploded. How long will those trends last? I don’t know. The technology that is available to communicate to people is rapidly expanding. There is a real art to finding the right trend to pick up on and use to communicate with people. I like change and challenges. I’m not one to sit still. That, to me, is very life giving, to look at those things as new opportunities for us.”