Groups back out of health care coalition 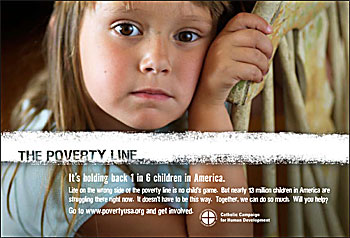 This public service announcement is part of the “Poverty Line” campaign, created by the U.S. bishops’ Catholic Campaign for Human Development.
Both JOSHUA and ESTHER are part of WISDOM.

The diocesan statement noted that earlier in the week, JOSHUA, based in Green Bay, and ESTHER, located in the Fox Cities, had notified HCAN to withdraw their membership. Both groups have received funding from the Catholic Campaign for Human Development (CCHD) and Operation Rice Bowl, national collections operating under the direction of the U.S. Conference of Catholic Bishops.

“Given the revelations of Nov. 12, we are researching the details to ensure there are no problems with CCHD and ORB grants authorized by the Diocese of Green Bay,” noted the diocesan statement. “If there is any conflict of principles, we will see how we can continue the good work of local ecumenical groups and uphold the teachings of the Catholic Church.”

Both interfaith organizations, which include many Catholic parishes in their membership, issued statements on their Web sites explaining their relationship with HCAN.

“We have been part of a larger coalition, Health Care for America Now, with an agreed set of principles in support of health care reform,” said the joint statement. “On Nov. 7, HCAN issued a statement that included a stance for reproductive rights.”

Both groups said they have “maintained that every human life is of infinite value, and have encouraged members to follow their church leadership on this issue.”

HCAN’s position forced the groups to immediately withdraw their partnership from the organization, said the statement. “We continue to support and work for health care reform, bringing coverage to millions that are left uninsured at the present moment.”

In the past three years, ESTHER has received $15,500 from CCHD. Joshua received $4,000 from Operation Rice Bowl in 2008. All funds went to promote leadership training and support of immigrant communities.

In an interview with The Compass Nov. 13, Stephanie Gyldenvand, ESTHER organizer and spokesperson, said she and other ESTHER and JOSHUA officials were upset to learn about HCAN’s abortion stance.

“When we started with HCAN, there was an agreed set of principles” on health care reform, she said. “But the position they decided to take (on abortion), without notifying anyone, made it clear that our partnership could no longer continue.”

The conflict began when Rep. Bart Stupak (D-Mich.) proposed an amendment to the health care legislation that would prohibit the use of federal funds to pay for abortion. When the amendment was approved, followed by passage of the Affordable Health Care for America Act on Nov. 7, HCAN issued a statement criticizing the amendment.

Once WISDOM, the Gamaliel Foundation’s Wisconsin affiliate, learned about the change in HCAN’s philosophy, they also issued a statement.

“Our position is consistent with the U.S. Catholic bishops and a wide range of other denominations who want affordable health care that also protects immigrants and respects life,” said David Liners, WISDOM director, in a Nov. 6 statement. “We wish to communicate that we understand and respect the bishops’ position: to keep in place the current ban on direct federal funding of abortions and ensure that no federal subsidies go to pay for abortions.”

The diocese learned about the dispute in a letter that was e-mailed to pro-life organizations around the state Nov. 11. The letter accused the diocese of funding “radical organizations that advocate the tax-funded abortion of God’s children.”

In a telephone interview, the letter’s author, Jolene Churchill, would not comment on the matter. She said she was upset with church funding of “radical left wing groups” and “Chicago-style community organizing groups” and called for a boycott of CCHD’s national collection Nov. 21 and 22.

In her letter, she said the ESTHER Web site posted a note Nov. 7 asking viewers to “Call today to defeat the Stupak anti-abortion amendment.”

ESTHER’s Gyldenvand explained that the ESTHER Web site (www.esther-foxvalley.org) offered an RSS news feed from HCAN which posted stories related to health care. One of the articles opposed the Stupak amendment, said Glyndenvand. “(Churchill) said our organization was asking to take action. We were unaware of the Stupak article in the news feed on our Website.”

The RSS news feed has since been removed from the group’s Web site.

Gyldenvand sent a letter to Bishop David Ricken on Nov. 12 seeking to clarify the misunderstandings about ESTHER and JOSHUA. “ESTHER and our sister organizations would not act in opposition to the teachings of the church,” she wrote. “We regret that HCAN turned out to be an unreliable partner in this matter.”

Gyldenvand said that donations from CCHD are used specifically for immigration issues.

“We’ve been an outstanding partner in social justice with (Norbertine Br.) Steve Herro (diocesan director of social concerns) working for immigration rights,” said Gyldenvand. “We bring the voice of the Latino population together and address a number of concerns such as policing, driver’s cards and education. Without the funds, we wouldn’t be able to work with these groups significantly.”

Deacon Timothy Reilly, director of administration for the Green Bay Diocese, wrote about Churchill’s e-mail in a letter to the executive committee of St. John’s Homeless Shelter. He said the work of JOSHUA and ESTHER “has been impactful and inspiring” and that it was regrettable that “aspersions are made” against the diocese by Churchill without checking the facts.

“I think that you can clearly see that the funding awarded through the Diocese of Green Bay has all been for good causes and completely consistent with the teachings of the Catholic Church,” he wrote.

The Catholic Campaign for Human Development is the domestic anti-poverty, social justice program of the U.S. Catholic bishops. According to its Web site, www.usccb.org/cchd, CCHD’s mission is to “address the root causes of poverty in America through promotion and support of community-controlled, self-help organizations and through transformative education.”

In recent years, CCHD has come under criticism for contributions to organizations that are opposed to church teachings. Last September, funding was cancelled from two California groups after CCHD learned they advocated against a state amendment defining marriage as the union between one man and one woman.

CCHD continues to receive backing from the country’s bishops.

In a letter to members of his archdiocese Nov. 10, Milwaukee Bishop William Callahan addressed the criticism and urged support for the upcoming CCHD collection, slated for Nov. 21 and 22.

“From the very beginning, some people have criticized CCHD, arguing that the monies would be better used in direct aid to the poor or that community organizing is an inappropriate methodology for parishes,” he wrote. “CCHD has helped in many different ways and works diligently to verify that no funds will be used to support any activity or project that does not conform to Catholic teaching. For example, three out of the 243 groups nationally funded in the 2009-2010 cycle had their funding revoked when it came to light that they had taken political positions in opposition to church teaching.”

On Nov. 17, members of the U.S. bishops’ subcommittee overseeing the CCHD issued a statement to the fall general assembly of the U.S. Conference of Catholic Bishops.

“We pledge our ongoing efforts to ensure that all CCHD funds are used faithfully, effectively and in accord with Catholic social and moral teaching,” said the statement.

In their statement, Bishop Roger P. Morin of Biloxi, Miss., subcommittee chairman, and the five other bishops who sit on the subcommittee said all grants are “carefully reviewed at both the national and diocesan levels and are approved by the local diocesan bishop.”

“No group that opposed Catholic social or moral teaching is eligible for CCHD funding,” the statement said.

The statement said that funding is terminated immediately for any group that violates the conditions of a grant and “acts in conflict with Catholic teaching.” The statement cited three cases during the last year – out of 250 funded groups – in which funding was terminated and the groups were asked to repay any grant funds that were spent.

“However, one case is one too many and we are committed to strengthening CCHD’s review and monitoring processes,” the statement continued.

The bishops also pledged to “seek to strengthen CCHD’s unique and essential efforts to practice charity, seek justice and pursue the common good as taught in the social encyclicals of the church, most recently by our current Holy Father Pope Benedict XVI in ‘God is Love’ and ‘Charity in Truth.'”