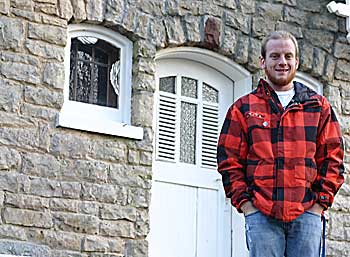 According to the 40 Days for Life Web site, the event is a “community-based campaign that draws attention to the evil of abortion through the use of … prayer and fasting, constant vigil and community outreach.” Forty-day vigils have been held in Green Bay for three years.

Lindner said he got involved in 40 Days for Life in order to share his faith and bring attention to the evil of abortion. After recruiting a few friends, their Thursday routine began by meeting at the UWGB Ecumenical Center.

They would then head out to the historic St. Anthony Chapel, hidden in the woods on the UWGB campus. There, they would prepare themselves through prayer before heading to the Medical Arts Building on Webster Avenue, where the 40 Days for Life vigils are held.

“I think the time spent in the St. Anthony Chapel was really important just to prepare ourselves for the night,” said Lindner.

He noted that it was not unusual for him or his friends to stay as late at 4 a.m., walking and praying. By the third week of the 40 Days event, Lindner and his group decided to invite others to join them. Linder admitted that those invited thought that the idea of praying outside was a little crazy. However, a number of new recruits showed up.

By the second to last Thursday, Oct. 22, around 11 young people journeyed to St. Anthony Chapel, where they held a candlelight vigil. They then drove to Webster Avenue, where they prayed the rosary and Divine Mercy Chaplet. What happened next, said Lindner, had God’s hand written all over it.

The group had not been in front of the Medical Arts Building long when Msgr. Roy Klister, rector of St. Francis Xavier Cathedral and pastor of Ss. Peter and Paul Parish, drove by. He stopped and joined them in prayer. Soon afterward, a woman crossing the street noticed the group and inquired who they were and what they were doing.

As Lindner told the story, when the woman found out that the group was there to pray for an end to abortion, she began crying, admitting that she had an abortion as a young woman.

Msgr. Klister and the group were able to pray with the woman, asking for her healing, which Lindner said was a powerful experience for all.

“God really showed himself,” he said. “He let us see the hurt and pain due to abortion. Having Msgr. Klister there was a chance for us to see God’s forgiveness and mercy.”

With the 40 Days for Life event now over, Lindner and his friends show no signs of slowing down. Moving forward he hopes to keep the Thursday night format where young people can come share the faith and pray together. He is also looking to incorporate some kind of regular service project, like working at St. John’s Homeless Shelter or St. Vincent de Paul thrift store, for all those interested.

As if that is not enough, the first-year college student said he hopes to enter the seminary in the fall of next year to begin studies for the Diocese of Green Bay. It is a call he said that he has been discerning for the past year and a half.