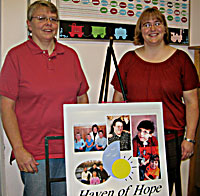 Joyce Luckow, left, and her daughter, Stephanie Gonzalez, started Haven of Hope Day Care in June 2009 as a service to the community. (Amanda Lauer | For The Compass)

Both women are members of St. Katharine Drexel Parish in Kaukauna. They opened the doors of their facility on June 1. It was a dream that was years in the making. Luckow, a registered nurse, had 15 years of ICU experience and 20 years experience caring for special needs children.

“I worked as a pediatric private duty nurse,” explained Luckow. “I ran into lots of parents who had special needs children who didn’t qualify for private duty nursing because it is financed by Medicaid. But those kids didn’t fit in a typical day care.”

Many times, parents who needed the two incomes found that one had to stay home to care for the child. “Marriages fell apart because one was working a lot and the other one was so involved in the care of that special child that they forget to work on the marriage,” she said. “Then you have a single parent attempting to care for a child, who can’t now because they can’t work either and they’re ending up on the welfare rolls.”

While Gonzalez has a different professional background than her mother, it still fits well with this business. “I went to St. Norbert College and I have a music degree,” said Gonzalez, who teaches piano and voice lessons and directs the adult mixed choir at the St. Aloysius site of St. Katharine Drexel.

The pair had originally looked at running a massive fund-raising campaign to build a 32,000-square-foot facility in Appleton but that did not transpire. Instead they moved into 4,000 square feet of an existing building that is owned by a church in Little Chute.

“As we talked to charitable organizations and foundations they said they were more apt to invest in something they could actually see rather than someone’s dream,” recalled Luckow. “But it was a blessing in disguise that we didn’t build with the economy tanking. Here we start small, we get our feet wet,” added Gonzalez.

“We truly believe that God has put us where we are and has connected us with certain people,” said Luckow, noting that many fraternal groups, such as the Knights of Columbus, support Haven of Hope. “It’s brought us volunteers and options for financial assistance. Volunteers help with the kids, they clean the place, do administrative work.”

The attendees of Haven of Hope Day Care range in age from 1 to 22. Their conditions run the gamut, from no disabilities to cerebral palsy, seizure disorders, autism and Down’s syndrome. “We have 29 registered. Some of them only come on school breaks, some are full time summer, some are full time during the school year, some are part-time. The most we’ve ever had in the building at once is 12,” said Luckow.

Gonzalez works full-time at the day care as the director and they have one full-time teacher, three part-time teachers and a full-time office staff person. Luckow is the service coordinator and a 40-hour-per-week-plus volunteer. The day care isn’t generating enough income to pay her so she still does private duty nursing full-time.

Haven of Hope has a tight budget as the goal is to keep day care affordable. They receive no outside funding. “It’s been very challenging because what the kids pay, pays for about half the payroll for the month. So we spend a lot of time doing third source fund-raising of all sorts,” said Luckow.

Advertising for the day care is done through several different venues including the Easter Seals help line, cerebral palsy organizations, the local school districts, and through the Color Mailer magazine, which offered them advertising at a substantially reduced rate. Gonzales hopes to fill the day care’s capacity of 50 in the near future.

While some days Gonzalez admitted she’s “ready to throw in the towel,” their work has been very rewarding. The appreciation shown to them from their clients makes it all worthwhile.

“One of our little boys has behavioral challenges and at one point had his own teacher because he needed one-to-one care. His aunt came in with a donation. She said, ‘You guys are heaven sent. There is nobody else who would take him,'” recalled Gonzalez.