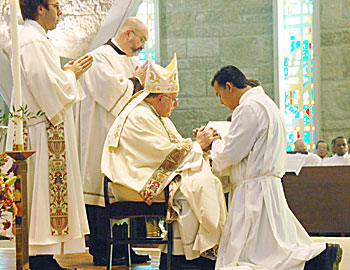 Deacon José Castañeda was ordained to the diaconate by Milwaukee Auxiliary Bishop William Callahan at Sacred Heart Seminary Chapel in Hales Corners Nov. 21. Deacon Castañeda will serve at Good Shepherd Parish in Chilton until his ordination to the priesthood on June 5, 2010.

“Fr. Bob (Kollath, pastor) has been a mentor to me,” he said. “I am there on weekends and one or two days during the week. I teach religion at the school, am working with the Hispanic community at the parish and attend meetings.”

He plans to continue in those roles while adding sacramental and preaching duties as a deacon.

“The ministries that are most important to me are being with the people,” he said. “I want to be present to people at the hospitals, nursing homes and through other opportunities.”

Deacon Castañeda, 32, traces his call to the priesthood back to his teens, but he didn’t respond immediately.

“I studied industry in high school,” he said. “I was working for Pepsi-Cola in Guatemala. I was a supervisor for production before I decided to go to seminary.”

Deacon Castañeda spent seven years in formation in his home country. Over the years, he had visited the United States annually. His brother, Gustavo, is a restaurant manager in Chicago. In 2005, he spent three months in the Windy City.

“During that time, I saw that there were not many people working with the Hispanic people at some of the parishes,” he said. “I began thinking about that and my situation.”

Deacon Castañeda enrolled at the University of Illinois-Chicago to study English as a second language. He soon met Fr. Tom Long, diocesan vocations director. That led to attending a retreat on Chambers Island and an invitation from Bishop David Zubik to be a seminarian for the diocese.

Deacon Castañeda would need to study more theology, but wanted to first improve his English. He took classes at St. Norbert College, while living at Xavier House in De Pere and serving at St. Philip the Apostle Parish in Green Bay.

“When I came to the diocese, my English was still a difficulty,” he said. “St. Philip became my home parish. They have a large number of Hispanic families. It was a good experience for me. Fr. Walter Stumpf (then associate pastor) was so helpful.”

While Hispanic ministry is obviously one of Deacon Castañeda’s strengths, he said he has worked hard to be able to serve in all parishes.

“We have many Anglo parishes in our diocese,” he said. “I have worked on my English to be able to preach and minister in an Anglo community. Good Shepherd was my first time in a parish where they don’t speak Spanish. I have enjoyed it.”

Deacon Castañeda’s formation includes experiences outside the seminary and parish life. He worked a summer at Camp Tekawitha, the diocesan camp on Loon Lake in Shawano County. He also served as a hospital chaplain through his participation in the Institute for Priestly Formation (IPF) program at Creighton University in Omaha, Neb. He looks forward to pastoral classes and more practicum training during the next six months.

“I really like old music from the ’80s and ’90s,” he said. “When I was in formation, I would listen to this music to help me with my English.”

The weather has been his greatest adjustment to living in the Midwest.

“I am thankful that it has been warm here lately,” he said. “It’s my father’s first time here. I’m glad he didn’t arrive and think ‘Wow, is it cold here.’ It is warm where I am from in Guatemala. I lived close to the beach, so it was at least 75 degrees there every day.

“I love the diocese,” he added. “The people have helped me grow in my faith.”

On Dec. 6, Deacon Castañeda will preach at the 10 a.m. Mass at Good Shepherd Church. A reception in celebration of his ordination to the diaconate will follow.