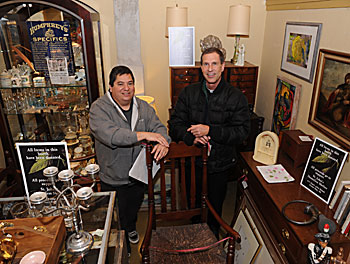 “My mother and Dad (Roderick) were true Yankees,” said Fr. Guy. “A Yankee is someone who never throws anything out. Throughout the generations and years, a lot of things had accumulated.”

Those things included antique furniture and silver pieces from the 17th and 18th centuries. At first, the items were placed at Somewhere in Time, an antique mall on Broadway Street in downtown Green Bay. But the owner, David Bartikofsky, then suggested the silver could be sold in an auction venue and bring in more money.

Fr. Guy, his father, his brother and his sisters all agreed and the silver was placed with Heritage Auction Galleries in Dallas and sold on Nov. 10.

Bartikofsky handled the details of placement for Fr. Guy, checking with “seven or eight auctions houses, including Christie’s and Sotheby’s.” But Heritage agreed to waive their usual 15 percent commission on the sale – a savings of more than $3,000.

“It’s a great cause and we’re happy that we could participate,” said Tim Rigdon, an auction director at Heritage.

That $3,000 is, perhaps coincidentally, exactly what it costs St. John’s each winter to buy boots to give to its clients.

While Fr. Guy admits that many of the silver pieces were “very beautiful,” he said he gets more pleasure out of knowing that they went to help the homeless. And, in a way, they also healed a painful time for him in his family’s history.

About 25 years ago, Roderick, who still lives Garden City, S.C., and Doris found themselves homeless. An unfortunate family situation had forced them to put their personal items into storage and live, for a time, on the road in their car.

“It was unknown to us,” Fr. Guy said. “They slept in truck stops along the way. I was really stunned and very angry (when I found out later).”

This was all years ago and Doris had long since put it behind her. But the incident influenced her son, who has been a fierce advocate for the homeless since his arrival in Green Bay in 2005.

“Along comes St. John’s and the request that the church have a shelter,” he said. “I thought about my parents and I had an inkling of what they went through. Of course, their homeless situation wasn’t critical. They still had insurance and a car. But now my vision of homelessness has been expanded and I understand the crisis that homelessness is in our great American society.”

So using his mother’s things now to help the homeless is a blessing.

“Things are very beautiful,” Fr. Guy said, after the auction of the silver. “But they can have haunting memories that go with them. And they can be very addictive, keeping them up and all that. So I was glad to be able to let them go for the shelter.”

Doris Blair had visited the shelter once, three years ago.

“She came here and saw the shelter. And remarked how it was really not very luxurious,” her son said with a chuckle, adding that his mother couldn’t understand how some people had not wanted the parish to host the shelter. But he believes Doris understood the crushing need.

“We’re talking about destitute people. They’re not just poor, they’re desperate,” he added. “These people aren’t just poor for a two weeks or a month. They aren’t poor because they can’t afford gas for a second car. … I don’t mean to be cheeky or sarcastic, but these people fell through the cracks. For them, food, clothing, medical care, a place to stay out of the elements, that’s where it’s at. Most of us can’t understand that. We think of poverty as a temporary thing.”

He believes that doing what his parents did – his father still calls periodically from South Carolina to ask about the shelter – is something that most people could do. Maybe they can’t donate $20,000 worth of silver, but just donate something, or volunteer as so many do at St. John’s.

“My family, my mom and dad are not powerful or wealthy,” Fr. Guy said, “but I really do think that, no matter who you are, you can contribute something to make a difference.”

“It is really a joy for me to do this in my mom’s name,” he added. “In a few years, this donation – there’s no name and no plaque, so no one will remember. But it remains in eternity in God’s heart that somebody survived another day, another week, another month because somebody stepped up to the plate. And that’s what counts.”

Some other items belonging to Doris Blair are still offered for sale at Somewhere in Time. Other parish members have donated antique items to be sold at the booth as well. And Bartikofsky has a donation jar set up there for St. John’s.

The story of the silver, which was promoted well by the auction house and made newspapers across the country, continues to bring attention.

“We did get a couple of checks, totaling about $500, made to the shelter,” said Fr. Guy, “just congratulating us for our efforts working with the homeless. People were moved by the generosity of selling some family things and thought it was neat.”