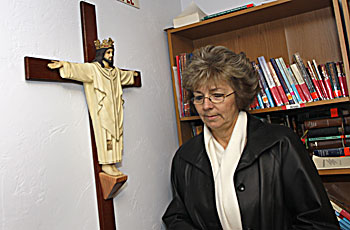 “Friendships are made,” she said. “We’ve lost some people, but others have come forward. I have grown so much in my own faith. I was always a strong believer, but you grow to the point where you have a conversion. I have met such beautiful people who have given me strength.”

Van Ooyen has been involved with the chapel since its inception. On Dec. 12, 1999, Christ the King opened as the third perpetual adoration chapel in the diocese, along with Neenah and Chilton. Chapels in Marinette and Appleton followed Green Bay. Another will soon open in Oshkosh.

“It took a lot of planning and prayers,” she said. “We had to get permission from our pastor (Msgr. Roy Klister) and Bishop (Robert) Banks. Deacon Jim Asmuth (Neenah) and Ron Muellenbach (Chilton) really helped us with the directives from the diocese. It was so nice having people who had done it before to guide you.”

The chapel is open 24 hours a day, seven days a week, so prayer commitments from people are essential. There was a natural fear in the beginning about who was going to fill the early morning time slots, said Van Ooyen.

“I didn’t know who we would get at 3 a.m.” she said. “It was a big leap of faith for all of us involved. Msgr. Klister was so supportive. We were blessed with Fr. Tom Farrell’s support when he became our pastor.”

The original chapel was located on the east side of the church, but the space was too small.

“People felt like they had to get up and leave when someone else arrived,” said Van Ooyen. “We can now seat about 25, and it is just perfect.”

Van Ooyen has not only served as coordinator, but has kept the same hour for the past decade.

“Sometimes, I don’t want to get out of bed,” she added. “It’s cold out and I’m tired, but when I come here, I’m so refreshed. I don’t feel the same. After I leave, I’m so glad I was here. Everything is better.”

Van Ooyen, the mother of five and grandmother of five with one on the way, continues to draw inspiration from people at the chapel. Many have been there from the beginning, including Van Ooyen’s daughter, Sarah, now 23.

“She was only 13 when she started,” said Van Ooyen. “I would bring her down here and then pick her up. She still has the same hour. My husband (Don) comes once in awhile. That’s kind of a miracle because he’s not Catholic. If somebody is sick and cannot make it, he will say, ‘I will go down there.’ It’s neat to see him doing that.”

The devotion of the people was most evident two years ago, said Van Ooyen. She was vacationing in Alabama when a snowstorm hit northeast Wisconsin.

“Green Bay was virtually shut down,” she said. “I called Msgr. (Klister) and asked him if we needed to close the chapel. He said, ‘No, a lot of people are going to still come out. If they can make it, they are going to come.’ One lady was there for six hours. If they could get out, they came for their hour. If they needed to stay because someone didn’t make it, they did. It was amazing.”

A celebration in honor of the chapel entering its 11th year is scheduled for Saturday, Dec. 12, at Ss. Peter and Paul Church. A rosary service will be held at 5:40 p.m. Mass is scheduled for 6 p.m. with a social to follow. Mass is also celebrated once a month for those who are a part of adoration.

“We cannot talk in the chapel, so it’s good to get to know each other,” said Van Ooyen. “I get to meet people that I may have talked to on the phone. You feel like you’ve known them for life.”

Reflecting on the past 10 years, Van Ooyen said she is thankful for the assistance from other coordinators and the faithful. She recognizes a personal change as a result of her faith journey.

“In my beginning years, I worried and worried,” she said. “I have come to realize that God is in control. You have to trust God.”