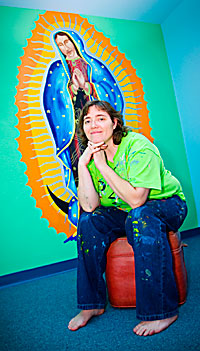 Carrie A.S. Caldwell sits in front of a mural of Our Lady of Guadalupe that she recently painted at Father Carr’s Place 2B in Oshkosh. Caldwell, who is hard of hearing, has found peace through her art. (Kasi Koshollek | For The Compass)

Caldwell spent much of her life in New York City, but her mother was from Oshkosh. When she visited Oshkosh, Caldwell spent some time with her mother and a half-sister. They lived for a time at Father Carr’s Place 2B, a Catholic organization founded by the late Fr. Martin Carr in 1974 to serve the poor, and found a sanctuary there.

“I was pretty young,” she said. “I didn’t know anybody in Oshkosh, and my birth mother didn’t learn sign language.” One of the first people she met at the Place 2B was Sr. Mary Pat Ferguson. “Most of my time here was spent with Sr. Mary Pat. She was really kind to us, helped us with our homework and gave us rides to school,” said Caldwell. “She was the first nun I ever knew and loved.”

Years later, as Caldwell tried to work her way through her depression, she drove past the Place 2B every day. One day as she passed, she told God she felt she was not serving him. “I could almost physically feel him tapping me on the shoulder,” she said. “He told me, ‘Go back and see if there’s anything you can do.'”

She did so, but was not enthusiastic. She asked and was given a pamphlet listing jobs. Serving food? No, she didn’t want to be around a lot of people. Cleaning? No, she was allergic to many cleaning products. Painting rooms?

She explained that she was an artist and asked if she could paint theme rooms and was given the go-ahead to try. Executive director Joe Geniesse and his wife, Christine, were blown away by the results, large murals and designs that covered the room. Caldwell has continued in her ministry to paint more murals in various rooms around the complex.

She found this ministry to be a healing and spiritual time for herself.

“I was just thinking I could go paint in a corner, pray and be left alone,” she said. “I was going through such a horrible time. (Painting the murals) was an amazing time for me. When I’m here, I can pray and worship. It’s so peaceful and healing to do that. I am using the talent God gave me for his purposes.”

When it came time for Caldwell to display her senior art show, she got special permission to hang it at the Place 2B, the place where she found so much peace and community.

“Being an orphan, I depend a lot on community,” she said. “I thought this would be a way to bring in people from the community and hopefully get involved” with activities at the Place 2B.

Caldwell’s show was the largest senior show in the history of the university. She displayed more than 250 paintings in all styles and subject matters as an expression of all the experiences of her life. And the show brought in even more visitors than she had hoped.

“The Place 2B has an important place in my journey, and this ties it all together,” she said.

Caldwell also has shown paintings about the deaf culture on the UW-Oshkosh campus, and is part of an exhibit currently on view at Bodyworks Internationale, located at 500 N. Main St. in downtown Oshkosh.

A homeless shelter in Green Bay has asked for her services, and she is continuing her work helping orphans and widows in Uganda through a Christian foundation.

“I love volunteer work,” she said. “I’ve received so many amazing rewards. It takes so little to help. God uses the gifts he gave us and I think he’s got a plan.”

Where once she was unsure about how she is impacting God’s kingdom, now she can see some of the results.

“The more I see it, the more I’m amazed,” she said of her art’s impact on visitors to the Place 2B. “It’s brought in a new light here. For people who come here out of desperation or need, it brightens things up a little bit. No one wants to be homeless, but if they see something beautiful, something inspired by God, maybe they’ll be inspired and find hope.”