His volunteer plate is full 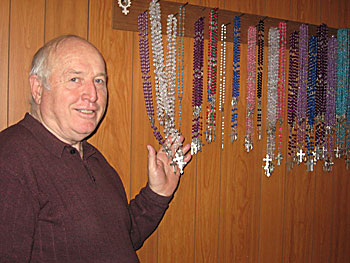 Cops was active in Cub Scouts, Boy Scouts and Webelos and his wife was a Brownie leader and Girl Scout leader as well.

After retiring from parish work, Cops focused his energy in another direction. “When my mom was 90, she went into the nursing home, St. Paul Elder Care. One of the nuns there, Sr. Florence, one day said, ‘What do you do with your mom all day? Why don’t you make rosaries?’ So then I was going to make one rosary for each of the kids and then I was going to quit. I’ve been making rosaries now for 17 years.” He has made thousands of rosaries.

Cops also credits his brother Hank with getting him started.

“I have a sister that has made 63,000 rosaries. Hank coordinates everything,” he said. “There’s people all over who make them and our Cops Foundation that he started in honor of my dad, they buy all the stuff for these plastic rosaries. They have sent well in excess of 500,000 rosaries to the missionaries all over the world. He sends a lot of them to Mexico. Mexico City asked for 50,000 just a while ago.”

He originally worked with acrylic beads but now his material of choice is glass because those beads don’t scratch. He makes standard rosaries but also what he calls Mother’s Rosaries, where the beads in each decade represent certain people in a woman’s life.

Praying the rosary is a way of life for the Cops family. “We pray two rosaries a day. We try to go to church every day, too. We’ve got a system. On Monday and Tuesday we go to St. Joe’s, Wednesday and Thursday at St. Mary’s, and Friday at St. Joe’s.” They also attend morning Mass at St. Elizabeth’s Hospital when possible.

One special project each year for Cops is making rosaries for first Communion children. “We go to St. Gabriel’s in Neenah, St. Mary’s in Greenville, and last year I went to St. Margaret Mary’s in Neenah,” he said. “I will bring the rosaries to the teacher before the first of the year and she keeps them until about a week before first Communion and hands them out to the kids.”

It takes about two hours to make a rosary, said Cops. Most of the beads he orders online or picks up when they are wintering in Florida, but the crosses and medals are generally purchased from St. Patrick’s Bookstore in Appleton.

In addition to making rosaries, Cops repairs them as well. He makes his rounds to St. Bernard Parish and St. Patrick’s Bookstore in Appleton to pick up damaged rosaries. He has a collection of thousands of beads to replace missing beads.

As if the rosary pastime doesn’t keep Cops busy enough, he has another mission. “I am known as ‘The Shoe Man,'” he said. Cops scours local rummage sales to obtain shoes, from children’s sizes to adult size 8, to be sent to the missions in Nicaragua and Honduras.

His daughter and son-in-law help him locate rummage sales. “Every church rummage sale that we see, we hit.”

In his spare time, Cops touches up and repairs religious statues. “Sometimes it gets a little busy. One time I got 59 statues a month before Christmas and they were all from nativity scenes. But people were always very grateful that we did it.”

Of all the volunteer work Cops does, the rosary work means the most to him. When asked why he devotes so much time to this project, he was straight forward in his answer. “I’ve got to do something other than watch TV and listen to those guys talk. I turn the sound off and make rosaries.”