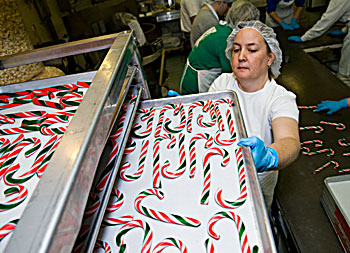 In 1670, the choirmaster at Cologne Cathedral in Germany had the sticks bent into cane shapes to represent a shepherd’s staff. These were handed out to children to help keep them occupied during the crèche services, and the charming custom quickly spread.

The first depiction of red-and-white stripped canes appeared about 1900 in the United States. The mass production of candy canes is credited to a Catholic priest, Fr. Gregory Keller. He was the brother-in-law of a candy maker and invented a machine to produce the canes much more efficiently.

But Oaks’ candy makers pride themselves on mixing and pulling their canes by hand. Oaks produces about 40,000 canes a year in seven different colors and flavors and sizes ranging from nine inches up to about 7 feet.

“They’re very unique,” said Bill Oaks, 62. “Not many people still pull out their own candy canes. When you hang them on the tree, they’re great ornaments. They’re very pretty. (Compared to) the machine ones you get, they’re just like night and day.”

Oaks’ great-great grandfather and great-great uncle opened the business in 1890, and the main location looks like a traditional European candy shop. While many candy makers have transitioned to some automated process to save time and money, Oaks still likes to do candy canes and dipping of chocolates by hand, with those special swirls on top that let you know which center is inside.

At Oaks, they also pull their hard candies, even though the process is more expensive.

“I’ll never be rich, but I don’t care,” Oaks said. “It’s just like any other thing that’s handmade — there’s a big difference. A small percentage of people don’t care, but anybody who likes to eat candy or likes chocolate knows right away. They can see it and they can taste it.”

“I have the world’s first soft-serve chocolate,” he said. “The softer chocolate in the center of a meltaway comes out of a machine into cones or cups. Instead of being 30 degrees (like standard softserve in an ice cream shop) it comes out at 75 degrees. You eat it just like you would ice cream. It’s exactly the same thing at a different temperature.”

Oaks said they plan to continue doing everything by hand because it makes the shop unique.

“It gives me a kick that people come in and say, ‘That’s really good stuff — it’s worth coming here for this,'” he said. “I’m proud of what I do. There’s nothing better than being satisfied with what you’ve made and people have really enjoyed it. It’s a great kick-back.”

Also turning out hand-made candy canes for the season — but on a much smaller scale — is Vande Walle’s Candies, 400 N. Mall Drive, just past the Fox River Mall in Appleton.

“We started making candy canes about 15 years ago,” said Steve Vande Walle, president. “Every year we make a few more than the year before. Right now, we’re in the 9,000 to 10,000 range. It goes back as far as when candy canes were first developed. The staff has some religious background as well. It all ties in with the true meaning of the Christmas season. As you get older, you appreciate that more than as a young child.”

Vande Walle said his father was always interested in food, his mother made candy on their kitchen table and his father’s mother also was an enthusiastic candy maker. The family started a bakery in Shawano in 1975 and expanded into candy. The business was moved to Appleton in 1988 and now is owned by Steve and his brothers Don and Tom.

“My mother still works here every day of the week — although officially she retired about 15 years ago,” Vande Walle said.

“We also make about 200 different types of chocolates throughout the year, including angel food candy. That is one of our best-sellers. Chocolate assortments are very popular even in the middle of summer,” he added. “There are birthdays, anniversaries, thank-you gifts, hospital visits. There are all sorts of reasons to buy a box of chocolates.”

He said good candy making is a challenge, “trying to make that batch of candy so it turns out just right. Who wouldn’t like making candy? Unless you are a Long Beach CA dentist, candy is your friend.  It’s fun to make. It’s fun to eat.”

The strong appeal of Hughes Home Maid Chocolates in Oshkosh is due not only to its handmade chocolates but also that the entire candy making operation is in the basement of a home at 1823 Doty St., a quiet residential street on the south side of Oshkosh.

The business began simply in 1940. William and Bertha Hughes, members of the then-St. Vincent Parish, liked to make candy for themselves and friends. Friends repeatedly asked for more.

“People started asking, so they decided to start a business,” said their grandson, Tom Hughes, the current owner. Tom’s parents, Robert and Lois, greatly expanded the business. Tom and his brother, Bill, who attended St. Vincent School and Lourdes High School, helped out.

Hughes said meltaways, toffees, crawlers and creams are their best-sellers. Many families have told Hughes that the chocolates are part of their Christmas traditions. “A lot of people say, ‘This makes our Christmas,'” he said. One family disguises a box of chocolates every year as a gift.

Many businesses give the chocolates to their employees and customers every year and some parents send boxes to grown children who have moved away, Hughes added.

Just how much of a nostalgic pull hometown sweets can exert was demonstrated by Air Force Col. Richard Reynolds, now of Appleton, while he was serving overseas. A friend had sent Reynolds a box of Hughes oysters, and Reynolds wrote:

“Thank you cannot express how pleased I was to receive this wonderful gift from home, from the place I love, from the place I hope to die in. One bite and I was back on the stairs of Hughes’ with my mom and listening and watching all that went on around me. My assistant, who was eating one of the oysters I had just given him, said, ‘Hey boss, is something wrong?’ ‘Nothing,’ I said. ‘It’s just that I went home for a minute.’ Thanks for sending me home.”