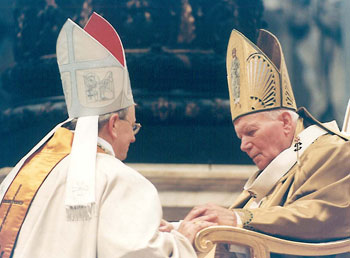 Newly ordained Bishop David Ricken kneels before Pope John Paul II during his ordination as coadjutor bishop of Cheyenne, Wyo. Bishop Ricken was one of 12 bishops ordained in St. Peter’s Basilica Jan. 6, 2000, the feast of the Epiphany. (Courtesy of the Ricken family | For The Compass)

A coadjutor bishop automatically becomes head of a diocese when its bishop retires. In Wyoming, Bishop Ricken served as coadjutor to Bishop Joseph H. Hart, who retired in 2001.

Bishop Ricken’s appointment as bishop, at age 47, meant he would be close to his home diocese.

“When it happened, we were delighted that he was going to be so close to home,” Carol Ricken said. “That was a delightful surprise.”

She learned about his appointment one month before the ordination.

“He said, ‘I’m going to be coming home.” I asked why and he said, ‘Something big is happening,'” she said. “So it was very exciting. It also meant that within a span of two or three weeks, we had to have passports ready. It was quite a hustle.”

Mark Ricken said the family was accustomed to not having their brother around for family gatherings. “He did, however, come home for Christmas most every year he was over there,” he said. “We talked on the phone and via e-mail often. When he became a bishop, it was clear to us that we would have to share him with even more people than we had when he was a parish priest.”

The trip to Rome and the Vatican was a whirlwind affair. “We were only there four or five days,” said Carol. “There were probably 35 of us altogether.”

Bishop Ricken was ordained on Jan. 6, 2000, by Pope John Paul II at St. Peter’s Basilica. He was one of 12 bishops ordained by the pope that day and the only American.

Newly ordained Bishop David Ricken is pictured with his relatives from the United States and Germany, including sister Carol Ricken, seated next to her brother, at the Hotel Columbus in Rome. While studying at the American College of Louvain, Belgium, then-Fr. Ricken was able to reconnect with German family members on his father’s side. Twenty-four relatives from Germany attended Bishop Ricken’s episcopal ordination at St. Peter’s Basilica. (Courtesy of the Ricken family | For The Compass)

“To be ordained by the Holy Father right at the tomb of St. Peter, with 11 other priests — it was so reminiscent of the Twelve Apostles,” he told Catholic News Service after the ordination. “The only way I can describe it is I was overwhelmed.'”

His father, Bill, had passed away seven years earlier and his mother, Bertha, was in the early stages of Alzheimer’s. She attended the ordination with Carol, Mark and his wife, Linda, and their son, Christian.

In addition to about 75 family members and guests from Colorado and Wyoming, 24 relatives from Germany made it to the ordination, said Carol Ricken.

While studying at the American College of Louvain, then-Fr. Ricken was able to reconnect with family members on his father’s side. “They had not been connected since 1948,” said Carol. “When he went to Belgium in 1978, he made connections with the family. Now both families are very close.”

The ordination Mass was celebrated on the feast of the Epiphany, marking the visit of the Magi to the newborn Jesus. The tradition of Pope John Paul ordaining bishops on the Epiphany began in 1979, the first year of his pontificate. The 12 newly ordained bishops in 2000 brought the number personally ordained by the pope to 290. Bishop Ricken was the 10th bishop ordained that day, making him the 288th bishop ordained by Pope John Paul II.

“The thing that stayed with me the most about the ordination was that being in St. Peter’s was a surreal experience,” said Carol Ricken. “Realizing that we were there and he was being ordained by Pope John Paul II. We were sitting next to families from Africa and the cultural differences were just amazing.”

Following the ordination, the bishops and their families had a private audience with Pope John Paul and an opportunity to greet him. A reception for Bishop Ricken and his guests was also held at the North American College, where the rector at the time was Msgr. Timothy Dolan, now Archbishop Dolan of New York. 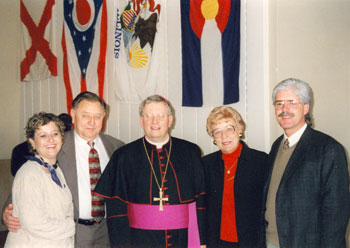 Bishop David Ricken is pictured with his cousin, Linda Manley, left, uncle, Joe Ricken, aunt, Doris Rizzuto, and nephew, Deacon Doug Manley. A reception for Bishop Ricken was held at the North American College after his epsicopal ordination. (Photo courtesy of the Ricken family | For The Compass)

After returning home, Carol Ricken said having her brother in Cheyenne gave the family opportunities to visit him. Cheyenne is about 215 miles from Pueblo.

“Our mother was fairly ill,” said Carol Ricken. “Since David was just a coadjutor, he was able to come home to Pueblo every month and that was just a great blessing. That happened for almost a year.” Their mother passed away Aug. 20, 2001.

With her brother so close to home, “it actually gave me an opportunity to be more actively engaged in his ministry,” said Carol. “It was about four years after that he asked me to join him in Cheyenne and take over leadership at Cathedral School and to reside with him.”

Carol, who was a music teacher and later principal in Pueblo and Colorado Springs, became principal of St. Mary School, Cheyenne, in the fall of 2005. She moved in with her brother at his residence, located 10 blocks north of the chancery building and about the same distance from St. Mary School.

She oversaw completion of a new $10 million school building in early 2009, then moved to Green Bay last summer to join her brother once more.

Mark said having his younger brother become a bishop did not change their relationship. In fact, he said, it “has been made stronger by the fact that he is admired by so many people in the places he has served — not only as bishop but as parish priest.”

“He has a very likable personality and is, at his core, a very humble man who loves to serve the faithful and his heavenly Father, while not losing attachment to earthly family,” added Mark.

Becoming a bishop did not change his brother, said Mark.

“He is still the humble, dedicated, servant-pastor, now shepherd, that he has always been,” he explained. “He also remains the dutiful, prayerful, yet happy and funny brother that I have known my entire life.”

According to Mark Ricken, it brings him satisfaction knowing that, as a bishop, his brother is able to touch more peoples’ lives.

“So many more people can experience my brother’s love of the faith as he serves them as their bishop,” he said. “It also gives me great satisfaction to know in my heart that our parents, who now reside in the Father’s kingdom, are so very proud of their son who now carries their faith to the many people that he serves here on earth.”

Although Bishop Ricken’s appointment to Green Bay in 2008 took his brother farther away, Mark said he, Carol and Bishop David remain close.

“The bishop and my sister are making every effort to stay in contact,” he said. “He presided at our son’s wedding and my sister sang. They are coming out after Christmas for a visit and to baptize our newly born grandson, their great nephew, Samuel Alan Ricken. While we are separated by distance, the adaptations we have had to make have been pretty minor.”