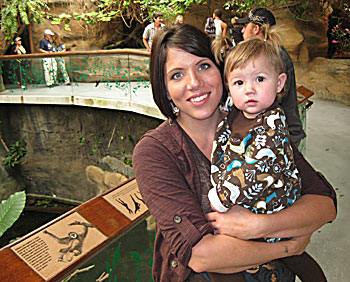 Melissa Ohden of Sioux City, Iowa, is pictured with her 2-year-old daughter, Olivia. When Ohden’s mother became pregnant with Melissa in 1977, she tried to end the pregnancy by abortion. Ohden, who says she has found forgiveness for her mother, will speak at a pro-life rally Jan. 17, 1 p.m., at St. Joseph Middle School in Appleton. (Courtesy of Melissa Ohden | For The Compass)

The abortion failed and Melissa survived. She was soon adopted and, even though her pediatricians believed she would suffer life-long complications from the abortion attempt and being born premature, Melissa had no long-term effects.

Today she is healthy and a mother herself. And she speaks about her experience, her biological parents and their families, her adoptive parents and her own daughter, to pro-life groups around the country.

She will speak at the annual pro-life rally from 1 to 3 p.m. Sunday, Jan. 17, at St. Joseph Middle School, 2626 N. Oneida St., Appleton. The rally is sponsored by Wisconsin Right to Life Fox Valley.

A face to abortion

Melissa’s intent with her public speaking is to give a face and a voice to those children who experienced abortion, as she did, but did not survive.

“It’s about being able to reflect what the true reality of what abortion is,” she said. “We in the pro-life movement,talk about unborn children all the time, but we don’t hear them. That’s one reason the Lord saved my life, to talk about that, about my unborn brothers and sisters.”

It’s something that resonates with her audiences.

“Every time I go speak somewhere,” Melissa said, “I am so surprised by the number of people who line up to speak to me. Grandparents, aunts, uncles, brothers and sisters, to tell me their story and tell me how much they are hurting because of an abortion — they are missing out on that person in their lives.”

This is also why Melissa founded “For Olivia’s Sake,” a non-profit organization “which seeks to peacefully raise awareness of the intergenerational impact of abortion on men, women, children, families and communities.”

Olivia is her 2-year-old daughter’s name. The name comes from “olive” and it came to Melissa when she was just a few days pregnant in August 2007. It was the day she first spoke in public, for Feminists for Life, a group she was working with for about two years. She was on Capitol Hill in Washington and preparing to speak when the name came to her. She was thinking about olive branches extended in peace.

“Peace begins in the womb,” she said.

Olivia was born on April 26, 2008, in the very hospital where Melissa’s life almost ended in abortion. It was a tough decision for Melissa, who almost ran out of the birthing classes there and who had always held her breath “every time I drove past the place.”

But it was all part of God’s plan for her healing. In the process, Melissa met a nurse who had been working at the same hospital for 30 years, a nurse who remembered her birth family.

“She cried and hugged me and told me I looked like my grandmother,” Melissa said.

Forgiveness has been a process

The forgiveness process has been a cycle for Melissa, more than a direct line forward. At times, anger and fear, still resurface.

That got her thinking about all the other children who will not be born because their potential parents were aborted. It was the impetus behind For Olivia’s Sake.

It also helped fuel her to continue to learn more about how her life started — and almost ended. After years of work, searching medical records, filing petitions in court, Melissa was able to learn who her birth parents were. She has not, however, met them.

She did send a letter to her biological father in July 2007, but never heard back from him before his death a few months later at age 51. But links were established by the letter, which her father’s family discovered when they cleaned out his office after his death.

A week after Olivia’s birth, Melissa said, “I received a card from her father’s aunt. I now meet with her regularly. She lives here in this city.”

She’s also met a cousin and her paternal grandfather, who “tracked me down.”

Her mother’s family has been harder to connect with. She does know that her parents dated for four years, but the pregnancy seems to have ended that. Her biological mother later married and had other children. And, from her maternal grandfather, she knows that “my live birth was not (her mother’s) intention.”

Still, Melissa said she cannot remain angry with her birth parents. Nor can she judge them.

“No matter what decision they made in regard to my life, they are my biological parents, and a part of me,” she said. “To reject them would be to reject myself, to hate them would be to hate myself. They are only human, and humans make some terrible mistakes, but it doesn’t necessarily make us terrible people.”

In fact, through what she acknowledges as God’s grace and guidance, she has been able to feel sorrow for her biological parents.

“I can only imagine the amount of pain and suffering that they went through in their lives as a result of this,” she said. “I believe that their hardships far overshadow my own. …They have had to live with the knowledge of what they’ve done. I only hope that they, and other men and women who have aborted their children, can find hope and healing in the fact that I lived, and other children can live too.”

And she adds that God’s grace continues to lead her, this time to a conversion moment. Raised a practicing Methodist, she said she is more and more drawn to the Catholic Church.

“I’m considering a conversion. I listen to Catholic radio and all I watch is Catholic TV. I feel that connection at a deep level,” she said.

Part of the connection goes back to the hospital where her life almost ended before it began.

“There was a priest who prayed outside the hospital where I was to be aborted,” she said. “And I know he saved my life.”

Prayers, she knows, save lives. And she wants everyone who prays to end abortion to know her story.