Catholic schools team up for chess 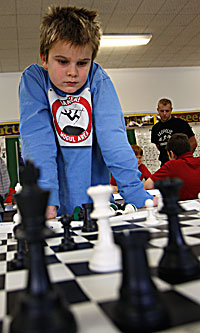 Joel Kiernan of Green Bay contemplates his next move during a chess practice at St. Thomas More School Jan. 12. (Rick Evans | For The Compass)

The 2009-2010 season is the third for the team, which practices on Tuesday afternoons at St. Thomas More School. Chess is also offered for high school students after school on Fridays at Notre Dame Academy under the direction of Dr. Jim Warpinski. The team participates in tournaments on various Saturdays from December through March, including its own event on Feb. 13 at St. Thomas More.

The skill level of the players has improved year to year, said Lubinski.

“Last year, we had some kids who were new to the game,” he said. “Everybody knew how the pieces moved, but there was a big difference in the skill sets of the players. This year, most of the kids had played before.”

Development as chess players and having fun are the main goals for the program. Lubinski also sees a faith aspect to the game.

“Patience is required in chess and patience in life in general is very important,” he said. “Humility is also very important. It’s exciting to win, but you don’t want to rub your opponent’s nose in it. We talk about being humble.”

Improved problem solving skills are another benefit from chess, he added.

“There are situations in life where you have to think through things instead of just reacting,” he said. “In chess you don’t want to just react to your opponent. It’s important to think things through before you move.”

Calvin Kanzenbach, a seventh grader at St. Thomas More School and a three-year team member, said he enjoys chess more than other games for a simple reason.

“I like that there is no luck involved,” he said. “You are just playing against someone and testing your skills. There is no dice, no luck to determine the outcome.”

Kanzenbach, who plays chess with his father, Mike, won three out of his five games at the team’s opening tournament. Nathan Rank, a sophomore at Green Bay East High School, is also a three-year member of the team. He joined the program as a student at St. Thomas More, but has been playing chess for nearly nine years. His mother, Brenda, introduced him to the game.

“I like the strategy,” he said. “One pawn can make a difference in the game.”

Rank, who won five out of five games at the opening tournament, helps some of the younger players at practice. Team members chart their moves to review what they did well and what needs improvement.

Lubinski has been playing chess since he was in the second grade at Sacred Heart School in Shawano. He played in tournaments with his brother, Steve. The transition from player to coach has been interesting, he said.

“I was so used to developing my own strategies to beat other players and now I’m in a sense teaching these kids how to beat me,” he said. “It’s a really good group. I enjoy it. Through this experience I’m getting the bug to get back to playing in tournaments. It would be nice to get back into it and have the kids come to see some adults play.”

The chess team is open to all young people, grades K-12, from parishes and schools that are part of GRACE (Green Bay Area Catholic Education System) and homeschooled students. Tournament play is not required to take part in practices.

Ashley Reif, 11, a member of Ss. Peter and Paul Parish, Green Bay, is in her first year with the team and recently played in her first tournament.

“It was really cool,” she said. “I learned a lot. This is fun. I will play with anyone.”