Children are her life 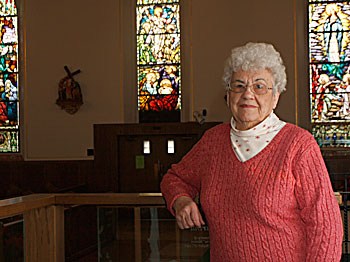 Dorothy Leisgang (Photo by Rick Evans | For The Compass)

Following nine years of guiding the first Communion students, Leisgang was asked to coordinate faith formation for the primary grades. She served in that position for 19 years until the formation of the Quad-Parishes, the linked parishes of Annunciation, St. Joseph, St. Jude and St. Patrick in 2007.

“I first said, ‘No, I can’t do it,'” she said. “Marge Frase, who was the director here for many years, told me, ‘We need somebody and you know the program.’ She kept saying, ‘Dorothy, God is calling you.’ We still talk about that when I see her. We had a good group. They all helped me.”

Her involvement in faith formation provided spiritual growth, she said.

“It very much helped my faith life,” said Leisgang. “I enjoyed it. I went to all the workshops and got advanced certification. The friends I have met here have been so good to me. When I felt like I couldn’t carry on, there were so many people in the parish who would come to me and say, ‘You are doing a good job.’ That helped me through it. I try to compliment people whenever I can.”

She still serves children today as a faith formation aide and recently attended a meeting to become involved in a Sunday church time program for young children. Leisgang also serves at Mass as a lector and extraordinary minister of holy Communion. She helps lead the prayer vine program, counts money from the weekend collection, assists with the annual May crowning ceremony and brings Communion to a 106-year-old woman each Sunday. Leisgang credits her strong faith and desire to provide outreach to her childhood in Seymour.

“We never missed Mass when we were children,” she said. “Religion was the most important thing in our lives. When Easter time came, those days were spent going to church. I just wanted to hang on to it. I still do.”

Leisgang has lived in Green Bay since 1956. She was a member of St. Francis Xavier Cathedral Parish for 17 years before moving to St. Patrick in 1973. Her husband, Gerald Leisgang Sr., who died in 1998, was also active in the parish. He served as an usher and built items for the parish, including storage shelves for the faith formation program.

The couple’s dedication to the church was passed on to their children. A number have taught religious education. “When we had all the kids at home, we would pray the rosary each day after dinner,” she said. “That was important to us.”

If she could pass on advice as both a parent and a religious education teacher, Leisgang would encourage parents to take their children to Mass regularly.

“The Mass on Christmas Eve was just the most beautiful Mass,” she said. “Fr. Don (Everts, pastor) said the Mass. The choir was wonderful. Everything was so perfect and beautiful. There were so many children in church. Maybe that’s why it was so beautiful because the kids were there. Where are they otherwise? How can they learn if you don’t show them an example?”

Prayer remains a constant in Leisgang’s life. She leads a prayer service once a month at the Fort Howard Apartments in Green Bay.

“A room is set up for it,” she said. “It’s a Catholic prayer service, but anyone can come. We do all the readings and talk about them.”

She also displays her love of prayer on her license plate, which, when deciphered, reads “Pray Always.” When out in public, a woman questioned her about the message on her vehicle.

“She rolled down her window and asked me if it meant ‘pray always,'” said Leisgang. “When I told her it did, she said thank you and that it made her day. She had been having a bad day up to that point.”

Leisgang plans to continue volunteering as long as her health allows. Knowing you helped someone is rewarding, she said. For example, she recently came across a former faith formation student.

“I bake for bingo on Friday nights at St. Patrick,” she said. “One of the boys came up to me. He said, ‘I haven’t seen you for awhile. Can I give you a hug?’ It’s nice to see them doing well. One of my students is now teaching over at St. Joe’s. We’ve had a lot of good years here.”