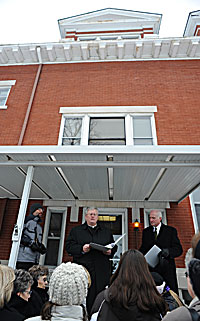 The Diocese of Green Bay officially completed its central offices relocation with a ceremony that began at the former Chancery building and ended at the St. Joseph Chapel on the diocesan grounds in Allouez Dec. 23. Bishop David Ricken and Deacon Tim Reilly, diocesan director of administration led the ceremony. (Sam Lucero |The Compass)

“The committee had brainstormed on lots of alternative ideas, including a major conference center on the west side of campus, an auditorium style building,” said Deacon Tim Reilly, diocesan director of administration. “Out of those brainstorm sessions came the recognition that the Chancery building had some inadequacies.”

An architectural review of the Chancery, completed in 2005, revealed the costs to renovate the building.

“As I always do, I went to the last page first,” said Deacon Reilly. “Renovations called for $1.7 million to $2.1 million and we would end up with less square footage. That was a situation I couldn’t embrace.

“Having worked in industry for so many years, where safety was such a high priority, I found it difficult to, in good conscience, not address the issues of safety in this building (the former Chancery),” he added. “It was built as a residence, but was being used as an office building. If there would have been a fire, there could have been dire consequences in trying to get people out of the building safely.”

Safety, accessibility for those with disabilities and security were the three key components fueling office changes. Deacon Reilly said that his initial suggestion was to put an addition on Bona Hall, but architectural reviews of Melania and Bosco led to the selected plan.

“Melania and Bosco are institutionally solid, well-maintained buildings,” he said. “They have good roofs and good windows. They each have 100 more years left in them.”

Renovations were required in Melania and Bosco, but at costs 70 percent less than building new, said Tammy Basten, diocesan director of facilities and properties. “Adaptive reuse,” as the project is described, was funded through donations, including a $1 million gift from an anonymous donor, and the sale of non-strategic revenue generating property. Bishop’s Appeal dollars were not used for the building project.

“The biggest expenses were installing elevators in both buildings and building the mezzanine level in Bosco,” said Basten. “The rest involved general office updates.”

Both Melania and Bosco halls were built in the 1920s as part of St. Joseph Orphanage. The former gymnasium in Bosco allowed for the mezzanine level, an additional floor for office space.

From four to three buildings

The consolidation of four buildings into three did not require sacrificing space. The capacity of the buildings was examined in the planning process. 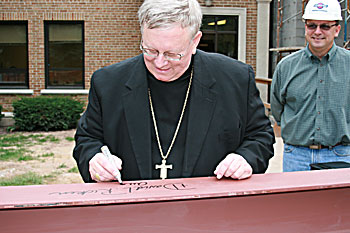 Bishop David Ricken signs a steel beam used in renovation of Bosco Hall, which now serves as the Chancery building. Looking on is Mark Robbins of Performa Architecture. (Courtesy of Clare Sturm | For The Compass)

“We did a space inventory to determine the utilization factor,” said Basten. “For example, Bona Hall was operating at 55 percent. Melania was at 54 percent. There are a few offices that are smaller, but we’ve been able to accommodate those people with updated shelving and storage.”

A bidding process was utilized in hiring a general contractor, Miron Construction, and all sub-contractors.

“We accepted the lowest qualified bid by trade,” said Basten. “This was a good thing, because it brought a variety of vendors and sub-contractors within the community working on this project.”

The first office moves began on Nov. 2, when the Catholic Foundation relocated from the former Chancery to the second floor of Melania Hall, and Facilities and Properties moved from Bona to the first floor of Melania. Relocations to the new Chancery began on Dec. 14. A blessing ceremony and open house, featuring tours of both buildings, will be scheduled for late January or February, said Basten.

One of the surprise developments of the project was the reopening of the tunnel between Melania and the new Chancery, added Basten. Work on the tunnel was not intended. Leaks were repaired and it was weatherproofed to renew its access.

“It’s now pedestrian safe,” said Basten. “People can use the tunnel for getting from one building to the other when the weather is cold or stormy.”

Parking is sufficient on the west side of campus. There are currently 256 parking stalls.

“The objective is to be respectful of visitor parking,” said Basten. “The Chancery will continue to host larger meetings, so we did a parking study to make sure we had adequate space.”

Bishop Ricken and Deacon Reilly offered prayers and reflection at the closing ceremony of the historic former Chancery. The colonial revival brick and stone structure was constructed as a residence for Bishop Fox, the diocese’s only native born bishop, in 1911. The building served as the bishop’s residence for 65 years. In 1976, it was converted to office space and a new house was built to the west.

Building up for sale

The former Chancery building is currently for sale. Depending on the interest of the buyer, the property is available with or without the building.

“The land that the building is on is appraised at a high amount than with the building,” said Deacon Reilly. “There is enough land for two commercial lots. The lot line is at the edge of the building, so you would have to take the building down to get the double lot.”

If the building is removed, preservation efforts will be part of the process, said Basten.

“We want to recycle every part of the building,” she said. “We will take great care in making sure we recycle the materials.”

“The fear that you have with this property if it is sold with the building is that it goes into disrepair,” said Deacon Reilly. “That’s hard for people who have affection for this building and it is a reflection on the diocese. There is a big concern, whoever it goes to, that the property stays well maintained.”

The drive south of the former Chancery will be blocked to no longer allow through traffic from Webster Avenue to the west side of the diocesan campus. It will continue to provide access to US Bank, but the change will create more privacy for the bishop’s residence.

The diocese is conscience of being welcoming to those utilizing services at the diocesan offices, said Basten. A sidewalk was constructed this past year along St. Joseph Street to accommodate bus passengers to and from offices.

No plans for new building projects

The diocese does not currently have plans for any new building projects, said Deacon Reilly. Property behind Wells Fargo Bank on Webster is diocesan owned and provides revenue potential for condominiums comparable to the adjacent Webster Heights. In addition to the former Chancery, the diocese has property for sale in Howard and Darboy. Both lots were purchased as potential sites for parish building projects, but are no longer needed.

“I would rather get out of the property business,” said Deacon Reilly.

The administrative offices, including Deacon Reilly’s, are located on the second floor of the new Chancery. He sees benefits to having all employees in closer proximity.

“It’s not a major obstacle to go back and forth, but I believe that our new office situation will allow a lot more interaction and access to other people. Basically, all of ministry services will be in the same building.

Deacon Reilly praised the College of Consultors and Bishops Ricken and David Zubik for their supports of the campus changes, and the Village of Allouez for its cooperation. Everyone involved took a proactive approach, he said.

“I see this as something that needed to be done and needed to be addressed,” he said. “It would have been easy to say, ‘We will save it for someone else, wait until the building is absolutely falling apart.’ I feel good that we didn’t ignore the report. We put a lot of work and thought into it. We accomplished those goals of safety, accessibility and security.”