Haas draws strength from her faith 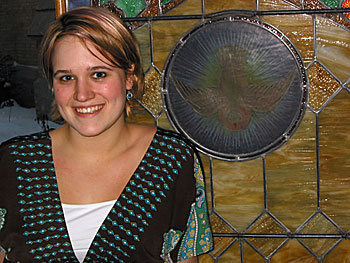 Cailin Haas (Photo by Tom Kelly | For The Compass)

“The conditions were typical for the area where I stayed,” Cailin says, “but what really made an impression on me was the powerful faith of these people. In that respect, they’re very rich.”

Her eyes-wide-open attitude toward today’s prevailing blur between needs and wants is evidenced by the firm conviction that, “with Jesus, everything is going to be all right.”

Cailin says she relied heavily on the power of that faith following the recent loss of both of her grandmothers. “I gave the eulogy at the first funeral, despite my lack of readiness to let go. It’s difficult to focus on other grieving family members when you’re grieving yourself. But I remember feeling God’s reassurance and gaining the understanding that it was all part of a plan, that I would see my grandmother again. I remember grasping how, for everybody, we will never know when — or how quickly — our time to leave this life will come. It’s sad to have to say goodbye, but it’s only for a while.”

Calin’s surviving grandmother was so touched by the eulogy that she asked Cailin in advance to do the same for her.

Considering the wide, geographically scattered nature of many families today, Cailin acknowledges the great gift of her grandparents’ nearness. “I was her youngest grandchild and, with her living only a couple of miles away, we had a close relationship in every sense of the word,” she says.

As it turned out, Cailin was present at the death of her other grandmother in the summer of 2008, not long after her grandfather was diagnosed with cancer. “She had been worried about being without him,” she recalls.

Today, Cailin’s grandfather’s cancer is in full remission. “He’s vibrant as ever, sharing his time with us for dinner or football games a few nights a week.” She appears puzzled for only a blink, then says, “Jesus understands. He’s seen it all. We have him and can give of ourselves freely despite our anxieties and grief.”

The ease with which Cailin lives her faith is further enhanced by her participation at the National Catholic Youth Conference held Nov. 18-22, 2009, in Kansas City, where 22,000 enthusiastic young Catholics gathered to pray and celebrate their faith.

“You can’t go there and not be changed forever,” she says. “There’s a great, widespread upwelling of generosity and charity for everything you do and have to offer. It’s difficult to describe how wonderful it is to be among 22,000 people deeply connected by their faith, regardless of their emotions, fashion, wealth, hair, race … whatever!

“People can sing, dance, laugh or cry. The energy and connection are eye-opening, unreal … euphoric. When you experience such a wide-scale acceptance of others you can’t help loving yourself more — something we all need in order to love God and love others. We have our faith. It’s like I said before, everything is going to be OK.”

Cailin, an Appleton East High School senior — along with several longtime and newfound friends from the Green Bay Diocese — came back from the conference to face many questions from peers. They ask why she went, why she goes to Mass, and why she carries the rosary that accidentally slipped out of her pocket one day at lunch. Such questions don’t shake her.

“I tell them it’s a faith-strengthening event. And faith doesn’t start and stop with Mass,” she says. “Celebrating Mass — especially with 22,000 other people who share your faith — can be like a big party. I love that and look forward to it. But we can’t be at Mass all the time.

“Throughout the week, faith becomes a smaller party. I find it in my friends, the ongoing effort of trying to live it out, and finding lots of opportunities to be inviting and to share God’s love — even when others don’t know it.”