Haiti on minds of local Catholics 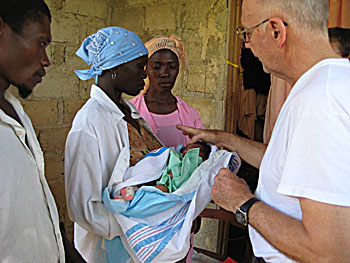 Fr. Larry Canavera, associate pastor of St. Patrick Parish in Menasha, baptizes a baby in Noyau, Haiti. (Courtesy of Friends of Haiti | For The Compass) 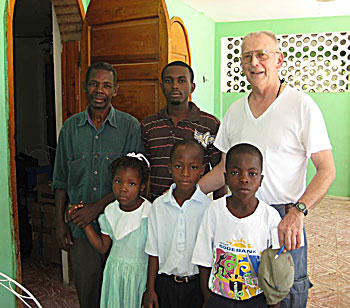 Fr. Larry Canavera, associate pastor of St. Patrick Parish in Menasha, is pictured with a father and his three children. The man’s wife died in Hurricane Ike in September 2008. Also pictured is Yves, a Haitian interpreter who works with Friends of Haiti. (Courtesy of Friends of Haiti | For The Compass) 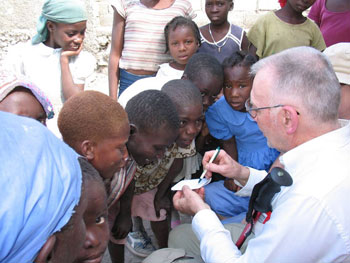 Fr. Larry Canavera, associate pastor of St. Patrick Parish in Menasha, teaches children some English words while awaiting for a ride from the pick-up point south of Plaisance, Haiti. (Courtesy of Friends of Haiti | For The Compass)

Friends of Haiti began as a parish twinning program with St. Anne Parish in Thomazeau, located about 20 miles northeast of Port-au-Prince. Due to road conditions, the drive from the capital takes about 45 minutes to one hour, he said.

In addition to Thomazeau, the parish boundaries also include villages further north, including Grand Boulage, Mahotiere, Plaisance and Noyau. The parish is home to about 50,000 people, with 11 chapels and several schools.

“We conduct medical missions in usually four or five locations each time we go,” said the priest. “We usually serve like 5,000 people when we have our medical missions. We are also working on water, education and economic development.”

Fr. Canavera’s most recent trip to Haiti was last October, when he, 15 medical doctors, two dentists, 25 nurses and 30 other volunteers traveled to Thomazeau. He was preparing for another trip Jan. 18, but the trip has been canceled.

“We were going to be studying water resources and water needs in the areas we serve,” he said. “We just feel that the main thing needed right now is the great relief effort” that is under way. “We don’t think we could get through Port-au-Prince with all the deaths. With the death of the archbishop (Joseph Serge Miot), people are in grief and we can’t proceed with the projects.”

Fr. Canavera said he was happy that a national collection was to be taken up in parishes last weekend for Haiti. “We need to work through established means and Catholic Relief Services has been, is and will be in Haiti” to provide relief.

Dr. Jack Hale, a Green Bay obstetrician, is a founding member of Friends of Haiti. Since 2000, he has made about 18 trips to Haiti. “The poverty and the lack of medical care is a big thing,” he said about the challenges there. “I think we’re making a small improvement in the areas that we’re serving. There’s a little less desperation because they know we’re coming back and I really think there’s a small improvement.”

Hale said seeing the damage in Port-au-Prince “is pretty amazing. And pretty sad because the people don’t have anything at all and now they have even less. They don’t even have a roof over their heads, which is something we can’t comprehend.”

He fears that a food shortage and lack of medical care will lead to deaths by starvation and dehydration.

Hale, who last traveled to Haiti in October 2009, hopes to lead a five-day surgical trip to Haiti with four other medical doctors in March. It will be the group’s first surgical trip and he expects them to perform procedures such as hernias and hysterectomies.

“We finally found a place where we could do surgery, so we organized a surgical trip,” he said. “That’s in about seven weeks, so hopefully we can go. Our medical trip will be in April, which will be 12 weeks from now. … We fly into Port-au-Prince, but the areas we serve, they are further north and east, where the damage wasn’t as severe.”

Hale said he is proud of the work Friends of Haiti has accomplished over the years. “I think we do a good job. A lot of good people are involved who are selfless, and I like going back because it helps keep you grounded. You don’t get too lost in the material world of today.”

He asks people in Wisconsin to keep the people of Haiti in their thoughts and prayers. “Not just now. We can’t forget about them because they are so poor.”

Jackie Kucera, a member of St. Bernard Parish in Green Bay, oversees travel arrangements for Friends of Haiti. She said the group was unable to contact many of their interpreters and drivers who live in Port-au-Prince. “We haven’t heard from many of (them), so there is a lot of worry and concern,” she said.

On Jan. 19, Joan Hogan reported that most of their contacts in Haiti had been located. “Now that most of our partners and friends in Haiti have been accounted for, emotions can settle down and all energies can focus on the work at hand,” she said.

When Friends of Haiti members travel, they stay at a guest house called Matthew25, which is run by Sr. Mary Finnick. Kucera said she was able to make contact with Sr. Mary last week. “She said they are using a generator and are able to take care of patients at a soccer field. We’re hoping we are able to get our supplies to them. Right now it appears to be a long shot.”

Kucera said the group will seek donations to send medical supplies to Haiti. “At the moment we are sort of in a limbo until things straighten out,” she said. “People are very generous and it’s been an overwhelming response.”

Kucera has even heard from doctors in Kosovo, who learned about Friends of Haiti online. They wanted to work with the organization to send 22 medical professionals to Haiti to help with the relief.

She said seeing the earthquake damage on television has been heartbreaking, “but the response has really been heartwarming.”

To learn more about Friends of Haiti, visit their Web site, www.friendsof haiti-gb.com.