More than words can describe 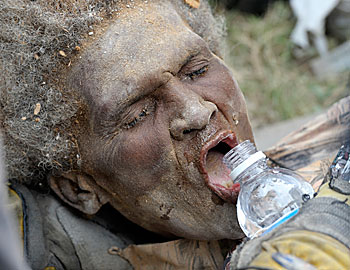 Anna Zizi gets a drink of water after members of a Mexican search-and- rescue team pulled her alive Jan. 19 from the rubble in Port-au-Prince, Haiti, after the devastating Jan. 12 earthquake. (Catholic News Service | Paul Jeffrey)

Jeffrey shot a series of photographs as rescuers extricated Zizi from the rubble, but the most powerful image was a tight shot of Zizi’s face, covered with dust and debris. Now free from the piles of broken metal and concrete, her eyes were shut and mouth open as she lay on a cot, sipping water from a plastic bottle.

The frame, in perfect focus, suggested to viewers the terrible ordeal that Zizi must have experienced. First, the ground shaking violently underneath her feet as she stood, sat or kneeled somewhere inside the cathedral. Then the sound of objects falling from the walls and finally the walls themselves caving in on her.

The cries of suffering and death, ringing in her ears for seven days, will likely haunt Zizi for a long time; longer than the injuries to her hip and leg.

But just as the indelible photograph captured the misery experienced by the frail Haitian woman, it also encapsulates hope. Rescuers searched for hours on end, day after day, before finally locating and rescuing Zizi and her fellow survivors. In a subsequent image, Jeffrey photographed the tears of joy on rescuers’ faces. Their enduring hope and prayers were rewarded in the best way possible.

The bottle of water, gently touching Zizi’s dry, cracked lips, symbolizes the relief that the world is now offering to the Haitian people and the hope that, through an unprecedented response and long-term commitment to recovery, this sinfully poor country can escape the shackles of economic and government tyranny that it has endured for two centuries.

From a Christian perspective, the photo is a powerful metaphor on which we can meditate. Numerous Scripture versus can be linked to it, especially the Gospel passage, “I was thirsty and you gave me drink…” (Matthew 25:35). By comforting Zizi (and by extension the Haitian people), we comfort our Lord, Jesus Christ.

According to Catholic News Service, the first words out of Zizi’s mouth, upon being pulled from the debris by rescuers, were, “I love you.”

What more reward do we need to continue giving all we can to help Zizi and the Haitian people as they recover from the nightmare of Jan. 12?