The Xavier Invite was part of the Wisconsin High School Powerlifting Association’s regional competitions. Region 3 meets are also scheduled for Feb. 13 at Neenah High School and on Feb. 27 at Omro High School. The organization’s state meets date back to 1968. Eleven male athletes from Xavier competed in Saturday’s regional.

“We have a lot of kids that are football players, but there are also a lot of kids who are not in another sport,” said Dave Adamovich, powerlifting coach at Xavier. “We’ve got a kid coming in with some physical limitations, Parker Van Ye, a great kid who is doing the bench press because that’s what he can do. We don’t turn anyone away. We don’t cut anyone. This is for anyone who wants to be a part of it.”

“I’m using it as off-season training for football,” said Alex Hein, a junior who played right tackle for the Hawks in the fall. “It’s nice to see how far I can push myself. We have an opening weight and our coach determines how far up to go from there.”

Many of the lifters don’t realize what they can achieve, said Adamovich. He encourages them to set high goals. 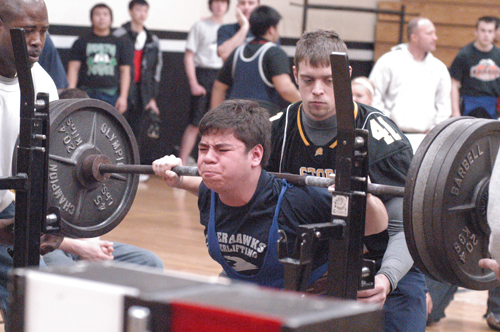 Justin Wiese, a junior at Xavier High School, Appleton, attempts a squat at the Xavier Powerlifting Invite on Jan. 9. Athletes competed in the squat, bench press and dead lift in an effort to qualify for state. Wiese, who finished fourth in the 165-pound division, successfully completed a lift of 440 pounds in the squat. (Dick Meyer photo)

“Some of these kids don’t know what they are capable of doing, because they’ve never done it before,” he said. “They are doing stuff way beyond what they thought they could do.”

Xavier athletes can earn a varsity letter in powerlifting by working out with the team at least three times per week. Camaraderie is not only found among teammates, but with all competitors, said Adamovich.

Adamovich added that the belief that the sport is primarily about physical strength is a misconception.

“Most people don’t realize it, but powerlifting is 75 percent intensity and attitude, and 25 percent muscle,” he said.

“There are days in practice where guys who can get 500 pounds up don’t even get 300 because they are not feeling it,” he said. “The practices are fun. When someone is attempting a heavy weight, everyone in the weight room turns and everybody is screaming. It’s great.”

Kinderman, a running back in football for the Hawks and a hurdler on the track team, is using powerlifting for off season training, but has also set goals for the competitions.

“I’m trying to get personal bests,” he said. “We work out almost every single day to reach our goals. The hard work pays off.”