After brief absence, he’s back to church 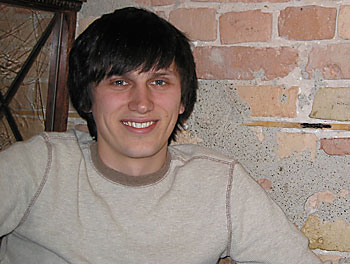 “As a child, my attendance at a Catholic Mass or Lutheran service was mostly determined by my family’s geographic location on any given Sunday,” he said. “I attended a small non-denominational Christian school in Oshkosh until my senior year in high school, when I transferred to Xavier in Appleton.

“At the time I liked the non-denominational services because there was about 45 minutes of teaching and lots of music,” added Schmitz. “I didn’t need a lot of church background to understand and get access to a useful message. And Catholicism? Well, I didn’t understand all of the rituals. There was only about 10 minutes of teaching.”

Chris recalls no particular motivation for learning, considering or giving a lot of thought to Catholicism. “To me, the non-denominational church seemed to have a stronger message about living out my faith. Catholicism, on the other hand, was a once-a-week worship with a service project on the side.”

After his freshman year at St. Norbert College, Chris says he began a two-year slide, “getting into the wrong things” and hanging out with people who were passive about living with their amoral choices and their consequences, hangovers and regrets.

Chris recalls an increasing sense of indifference. “I knew things weren’t right, but at that time I didn’t feel driven to give much thought to getting out of that funk. I knew there were times I should have said ‘no,’ but I didn’t have the ‘why not’s’ to really navigate the culture.”

He maintains that many of his friends during these college years were “still good people,” but his choices continued to slide — along with his grades and his relationship with his parents. To make matters worse, his coaches kicked him off the St. Norbert tennis team after he missed a number of important matches.

“This was the beginning, the turning point, for me,” he explained. “I could still attend practices, but I wasn’t allowed to compete in any matches for the rest of that season.”

Despite his inability to compete, this wake-up call renewed his dedication — not only to the game, but also to his studies and work. It inspired him to change and re-evaluate some of his relationships and to start making better choices. “My parents, friends and new girlfriend all brought to the forefront the importance of my relationship with God.”

Studying theology and spirituality more intensively during his senior year at St. Norbert, Chris recalls how the Spirit began to stir in him as he read and studied the works of Thomas Merton and Dorothy Day. He says this study reflected a more straightforward message that was immensely understandable.

“It was less caught up in all the differences and more focused on what unifies us,” he said. “The more I searched and read, the more I understood the importance of community and parish life. If you start with faith, it will lead you to others who are profoundly called to live it. And if you start with works, you’re bound to meet others of faith. They seem to intersect naturally, which is great because I need both.”

His relationships, including those with his family, got healthier and more enjoyable for all concerned. His grades shot back up. Athletically, he recovered his spot at the top of the St. Norbert tennis team’s lineup, “and not for physical reasons,” he asserts.

In addition to his newfound love for theology and spirituality, Chris discovered a new appreciation for the celebration of Mass, as well as the Catholic community and its teachings. Since graduating, he’s been working in youth ministry, including a housing project mission with six other parishes from the Green Bay Diocese. He also continues to work with youth groups in music ministry.

Both literally and figuratively, Chris Schmitz went from the bottom to the top of his game. But he’s not finished searching.

“I know there’s still a lot more to learn and do and understand.”