Feeding the hungry is meaningful act 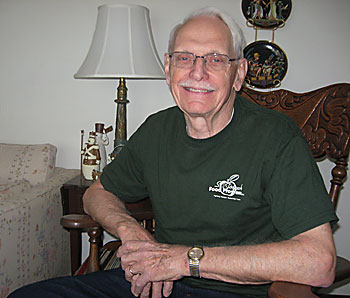 Every Tuesday you’ll find Cliff and two of his buddies in one of the St. Joseph Food Pantry trucks collecting food donations. “We go around to all the grocery stores like Pick ‘N Save, Copps, Festival. We go to Kaukauna, Little Chute, Kimberly, Neenah,” explained Cliff. “It’s mostly half a day except when the vegetables are great. We go to Oshkosh and when we’re done there we’ll pick up a truckload of sweet corn that’s been donated. We pick up stuff at just about every church. There’s a lot of generous people.”

Another factor that influenced Cliff to help out at St. Joseph was his parents. “My parents had just died and we broke up their house. We dispersed of everything they had,” he said. “We had money left over and we decided we should give it to the food pantry because, for my parents, meals and getting together with other people were always a big thing in their lives.”

Gloria noted that Cliff was retiring from Thilmany Papers in 1993. The food pantry was looking for volunteers. “So I volunteered him,” she said. “They were happy to get the money and Cliff.”

“She’s happy to get rid of me one day a week,” chimed in Cliff with a laugh.

St. Joseph Food Pantry isn’t the only organization that benefits from Cliff’s volunteer efforts. “I helped a lot at the old St. Joe’s; I helped repaint the whole school,” he said. “I was president of the Holy Name Society for the city of Appleton for one year. I made stuff for the ACES auction. I make rocking horses. I make M&M dispensers. I give them away all the time.”

Woodworking is a skill Cliff learned at his father’s side.

“My father worked in the mill and he built little kitchen tables and chairs for kids in the garage when he was home. I worked with him a lot,” he said. When Cliff’s granddaughter, Sarah, was graduating from eighth grade at St. Joseph Middle School, he constructed an eight-foot high cross incorporating marble from the old St. Joseph School building. The cross was signed by all the members of Sarah’s class and hangs in a stairwell at the school.

Gloria and Cliff are regular attendees of the Bible study conducted weekly at St. Bernadette. “We volunteer once a month to make the coffee there. You have to be there at five o’clock in the morning if you make the coffee. Then you set the tables up and you get ready for the doughnuts they bring in,” he said.

Ever since the Siebers family joined St. Bernadette in 1972, Cliff and Gloria have been members of the church choir. “Gloria and I sing in the funeral choir too. We sing at a lot of funerals.”

Cliff, who also volunteers as a maintenance man for his parish, said staying active keeps him healthy. “I like to tell a lot of stories and jokes. I like to keep people laughing,” he said. “The best part of volunteering for me is the self-satisfaction. If you’ve got the time to volunteer, volunteer. You’ll enjoy it.”