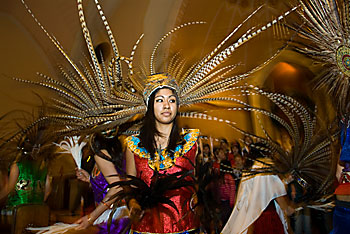 An “Azteca Caracol Sagrada” dancer performs a traditional dance at the end of Mass at St. Therese Church in Appleton on the feast of Our Lady of Guadalupe. Hispanic population in Wisconsin has increased by 48 percent since 2000. Kasi Koshollek | For The Compass

A prime example is St. Willebrord Parish in Green Bay — a parish originally established by 47 Dutch and Flemish families before the end of the Civil War, when most of Wisconsin was still an unsettled wilderness — where last year 1,295 Hispanic parishioners celebrated 150 baptisms, 130 first Communions and 11 confirmations.

Primarily from Mexico, the diocese’s Hispanic population is composed of people from North, Central and South America, Puerto Rico, Dominican Republic, Cuba and other islands of the Caribbean.

In Wisconsin, the Hispanic population has increased by over 48 percent since 2000, according to a newer estimate released by the Census Bureau last May.

Why come here? While Hernandez acknowledges the West Coast’s draw of fabulous food, wonderful climate and breathtaking vistas, he points out how Midwesterners are more open and welcoming. Like everyone else, Hispanics also find a more affordable cost of living here, as well as more opportunities to earn a fair wage. “They possess an exemplary work ethic that drives them to take the jobs others don’t want to do,” said Hernandez.

To the church, Hernandez says the Hispanic culture brings strong family values along with respect for elders, parents, priests, teachers, doctors and employers. “They also value the home as the first and most important school of human relationships. They regard the church as a natural extension of the family.”

He adds that Hispanic faith and culture are intimately united with the concept of God because of a deep appreciation of how the future is in God’s hands.

“Hospitality is also extremely important, characterized by warm expressions such as, Mi casa es tu casa (My home is your home), and, Tu eres mi hermano (You’re my brother).”

Upon Sr. Laura Zelten’s return from Nicaragua in 1997, she helped establish a stronger ministry for the growing Hispanic population in the Fox Valley area. “There were already Masses celebrated in Spanish,” she recalls, “but there was also a growing need for pastoral presence in areas such as preparation for the sacraments, visiting the sick and establishing Hispanic lay ministers who would sustain strong and stable growth and leadership for the future.”

Sr. Laura, currently serving as campus ministry director at Notre Dame Academy in Green Bay, is quick to correct any notion that the growing Hispanic population somehow changes the “face” of the church. “We are all the church. Ever new, the Green Bay Diocese has always been a welcoming church for newcomers. And, just like those who were here before them, Hispanic people offer unique and colorful cultural roots, traditions, rituals, devotions, music and foods.”

She invites interested readers to learn more about the cultural richness and significance of Our Lady of Guadalupe, Los Posadas, Quinceaños, Ash Wednesday, Good Friday, Dia de Muertos and Cinco de Mayo. “You’ll find things that are new to you, but don’t separate any of us. By embracing and celebrating our cultural differences we all become positively enriched around the same table.”

Also with the Green Bay Diocese, Sr. Jane Riha is coordinator of the Hispanic ministry, overseeing Disípulos de Cristo (“Disciples of Christ”), a Hispanic version of the Commissioned Ministry program. This three-year program requires over 200 hours of classroom time — plus homework, group presentations and exams — to not only feed each participant’s personal spiritual growth and development, but also to provide the Catholic theology, Scripture, doctrine and spirituality necessary to grow as confident leaders in their respective parishes.

There are currently 50 students attending Disipulos, which is now in its fourth year. In May of this year, 19 are expected to graduate. “The students’ ages range from the 20s to age 70, and they’re evenly split by gender,” notes Sr. Jane. “They learn a lot, but our real hope is for their growth in a deeper relationship with God, their families and others.

“Already we’re seeing a high level of involvement, initiative, creativity, generosity and willingness to serve in parish settings,” says Sr. Jane. “It’s very much a grassroots dynamic, with graduates working in areas such as Bible study, youth ministry training that encourage others to follow in these footsteps and a unique new consultative group that encourages people from varying ministries to collaborate.”