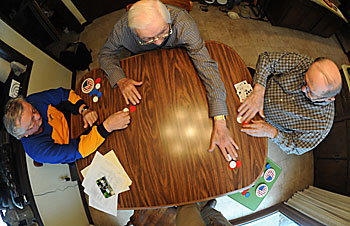 “It’s a game similar to three-handed Sheepshead, with bidding as done in Bridge,” said Fr. Nickel, who was ordained in 1947. “That’s a good way of describing the game.”

“It’s the Cadillac of card games,” chimed in Fr. Rickert, a member of the ordination class of 1945.

This summer the priests will mark an important milestone of sorts. On June 15, they will celebrate the 50th anniversary of an all-priest Skat tournament held at St. Mary Church in Kaukauna. Twenty-eight priests participated in that event, with 25 others unable to attend. There were other tournaments over the years, but this is the only one of which Fr. Rickert has written records.

“Msgr. Peter Salm was the host,” said Fr. Rickert. “Msgr. Salm and a lot of the older guys were avid Skat players. At that time, it wasn’t hard to find priests to play.”

Fr. Rickert, who took first place in that tournament with a 20-1 record and a score of 653, said that Skat was an opportunity for the priests to enjoy companionship. 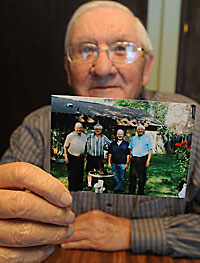 Fr. William Rickert displays a photo of the Skat players that included Fr. Charles Mocco, who passed away Jan. 14. (Sam Lucero | The Compass)

got together for the devotion in the evenings and they would come early in the afternoons and play Skat,” he explained. “When we were working, we played only occasionally. Now that we’re retired, we play more often.”

“We would get together at each others’ place once a week,” added Fr. Nickel. “For instance, we would play Monday. Five guys played and every fifth Monday you’d play at your place. That was quite common.”

Today the crew of Skat-playing priests has dwindled down to two. The third regular player, Fr. Charles Mocco, passed away Jan. 14. Before his death, the three retired priests had played together for about 30 years.

Fr. Rickert and Fr. Nickel continue to play Skat every Wednesday and Thursday with their friend Gene Wagner. They convene their twice-weekly card games at Grelinger Hall, where the two priests live, and at Wagner’s home in Allouez.

According to Wagner, he has been playing Skat since Fr. Kenneth Rodgers, who died in 2005, taught him the game. When Fr. Rodgers died, Wagner took his spot as a regular player.

The game requires only three players. A fourth player can serve as the dealer, said the priests.

Because it takes time to learn the rules of Skat, many people are not interested in the game. “The first look you take, you would say that it’s difficult,” said Fr. Nickel. “It’s not that difficult once you get to know the few basic rules.”

Fr. Rickert said Bishop Aloysius Wycislo occasionally played Skat with his priests. “The other (bishops) did not. I don’t think they knew the game,” he said. As for Bishop David Ricken, whose parents were from Germany, the priests said he is welcome to join them. 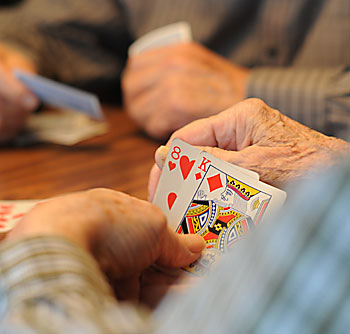 Fr. Leander Nickel holds his cards as Fr. William Rickert takes his turn during a game of Skat.(Sam Lucero | The Compass)

The priests say they are saddened knowing that a time-honored tradition among the presbyterate is fading away.

“It’s phasing out because we’re dying off, the old Skat players. The new breed doesn’t play it,” said Fr. Rickert. “We’ll just wait until the Lord sends somebody to us. If we get a little publicity, maybe somebody will say, ‘I’ve got to look into that.'”

Fr. Rickert added that since this is the Year for Priests, Catholics might find their story worth reading. “It shows what retired priests are doing. We still fill in (at parishes). We’re a big help in the diocese.”