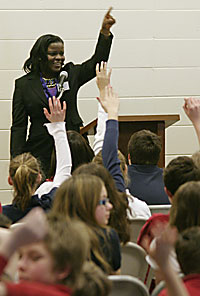 Theresa Okafor of Nigeria speaks to students at St. Bernard School in Green Bay Feb. 12. (Rick Evans | For The Compass)

On Feb. 12, Okafor shared insights about her homeland with students at St. Bernard School. Her visit was part of a weeklong speaking tour in Wisconsin in celebration of Black History Month and National Marriage Week.

Okafor provided an overview of family life in Nigeria. She explained that in her country of 150 million people the average family has six children. She added that extended family members live together and that grandparents and older relatives are held in high esteem.

“We don’t see our elders as a liability,” she said. “They have a lot of wisdom. There is honor in being the oldest member of the family.”

Okafor, who averages four visits to the U.S. a year, fielded questions from the children covering such topics as food, housing, animals and sports in Africa.

While life is good in Nigeria, a changing world is challenging African heritage, she said. In fact, her concerns about preserving traditional African values led to speaking opportunities in the U.S. While presenting at the World Congress of Families in the Netherlands, she met Susan Dutton Freund of ThinkMarriage, who organized her recent tour.

“I made it clear (to Freund) that Africa was really not interested in aid tied to population control,” she said. “I feel that there is a conspiracy to strip Africa of its cherished values by international organizations like Planned Parenthood and the United Nations. I’m not interested in these types of aid that want us to compromise our values.”

She said Nigerians value the dignity and sanctity of human life, strong family values and marriage.

“Among African-Americans, there is a different understanding,” she said. “Here, you have many broken families. The thought was that it would be good for people to hear about Africa from an African, born and bred. The goal is to give people a sense of Africa and create awareness.”

Okafor is the CEO of Life League of Africa, a group of young professionals who speak about the importance of the human family. Life League volunteers teach character based abstinence education.

“We are both reactive and proactive,” said Okafor in an interview with The Compass. “Abortion in Nigeria is illegal. Sometimes we hear that a bill is being passed speaking about reproductive rights. We know that ‘reproductive rights’ is a euphemism to bring abortion into the constitution. It’s a masking of abortion. We mobilize people, go to the government and state our position. We expose the lies.”

“Even though the curriculum had been proposed and adopted, we made sure it was removed from our schools,” she said. “The education of youth in the matter of sex is not something that should be done by the schools. It’s something that should be done by families. The home is the first school of the child. It’s up to the parents to live up to their responsibilities and teach virtues.”

The fight against contraceptives is an ongoing battle for Life League, said Okafor. Forms of contraception are promoted to both prevent disease and pregnancy in Africa.

“We don’t think it’s a solution,” said Okafor. “Contraception promotes a false sense of freedom. You have infidelity in families and more promiscuity among the youth. Risky behaviors come with other problems, drug use and crime. Pushing condoms in Africa is doing more harm than good.”

While population control efforts spurred by Western culture continue to be a prime concern in terms of abortion and contraception, euthanasia or assisted suicide is unimaginable in her homeland, said Okafor.

“You only send your parents to (a nursing) facility if they need assistance for medical care, not because they are a liability,” she said. “What we see in the West is some parents who think children are a liability. They only have children when it’s convenient to do so. You see the same thing happening with children. They consider parents a liability. They only have their parents around when it’s convenient to do so. The tables have turned.”

The influence of Western culture is far from being entirely negative, added Okafor. She regularly brings groups of children from Nigeria to the United States. In addition to taking young people to Disneyland and other recreational spots, she incorporates education into the trip. For example, Okafor has arranged to have former Miss Black California and abstinence speaker Lakita Garth-Wright make presentations to the groups.

“I want the children to see that there are some great people here,” she said. “There is also a lot they can learn from the United States. Resources are better managed here, unlike at home where there is a lot of exploitation. The resources are there, but are mismanaged. I also see a lot of honesty in the people here.”

What does Okafor hope the St. Bernard children learned from her visit?

“They didn’t oppose anything I said about family values, so that was good,” she said. “I think they found out that Africa is developing. It’s not as primitive as it is portrayed on the news.”