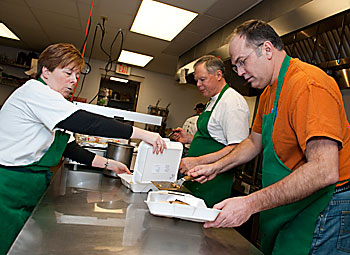 St. Patrick Parish fish fry volunteers Debbie Galeazzi, left, Steve Figi and Jeff Stilp ready the to-go orders of assorted fish dinners at St. Patrick Church in Menasha on Feb. 17. Between 40 and 50 parishioners volunteer to work at the monthly fish fry, which runs from October to April. The fish fry serves about 350 people each month. (Kasi Koshollek | For The Compass)

The committee currently hosts one community building event each month. Fish fries are the offering from October through April. The dinners are more than just fund-raisers, said Cathy McClone, a member of the grill/fry crew.

“It’s one of the areas where we have a lot of people involved,” she said. “We have at least 40 to 50 people working. Some high school kids help out as servers. There are also 25 to 30 bakers who make homemade desserts. It’s the service part of stewardship and it’s fun.”

The parish events committee, led by Denise Meyers, takes a creative approach to the fish fries. They develop a theme based on a state, country or region and plan the menu accordingly. For example, when New England served as the theme, chowder was the soup of the day.

“(The parish events committee) usually meets once a month,” said Meyers. “We come up with different recipes, which definitely help to keep it fun. One thing I hear from people is that they like the St. Pat’s fish fry because we have more grilled items.”

Meyers is not only the committee chairperson, but serves as the “red apron lady” at the event.

“You could say that I’m the go-to person,” said Meyers. “I tell the workers what needs to be done. I let everyone know what’s going on. The nicest part for me is that I get to meet so many new people. It’s fun just to see the people enjoying themselves. We get a lot of new people each month from other parishes.”

Bill Schultz helps prepare the fish for cooking in addition to his duties on the grill/fry crew. While he points out that the kitchen can become extremely warm, he said that he looks forward to working the fish fry each month.

“I usually work with the same people,” he said. “There is a core group of people and we all get along well. We are a small parish, so we need everybody’s help. It’s an opportunity where everybody can do their part. You don’t have to cook. You can serve soda, cut up desserts, wash dishes, clean up, deliver the food, answer to-go orders.”

There are perks to volunteering, he added. “We eat a lot.”

Schultz plans to add a volunteer from his family soon.

“My next step is to get my daughter (MacKenzie, 14) involved,” he said. “It’s good experience. It teaches them about responsibility. It’s good training if they want a job working in food service.”

The St. Patrick fish fry runs from 4 to 7 p.m. Prep work begins at noon. Approximately 350 people are served. Dine-in or take-out service is available, and dinners are delivered to the homebound and mill workers.

“We used to have big deliveries to the mills,” said McClone. “There are still a lot of group orders. We deliver 13 to 15 dinners to an assisted living facility. We want to be able to include people who can’t get here.”

Guests who attend the fish fry are sure to find fellowship, said Schultz.

“The way we have it set up, we use cafeteria tables,” he said. “People may end up sitting with people they don’t know so they get to meet someone new. It’s not rushed. It’s not like a restaurant where they are trying to turn tables over. Stay as long as you want.”