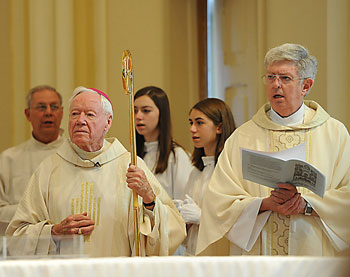 After his death, the tributes came in even faster. Within 24 hours, there were another 130. There were additional tributes on a Facebook group page.

“You will always be remembered for your sincerity, humbleness, and ability to connect with people of all ages. … especially the kids who so looked forward to receiving a ‘high five’ from you as you walked down the aisle during the recessional,” wrote Steve Walbrun at the Caring Bridge site.

“You always let everyone know before Mass you never took our presence for routine,” wrote Jodi Lee, Karley, Camie and Hannah Kilsdonk at the same site. “Your spiritual example was a beautiful shepherding of your sheep.”

Injured outside his rectory on the night of Feb. 14-15, the long-time pastor of St. Mary was not found until early morning. He had a skull fracture and his body temperature had dropped to 90 degrees. He underwent emergency surgery at St. Elizabeth Hospital, but remained in a coma afterwards.

Fr. O’Rourke became pastor at St. Mary in July 1986. It was his first, and only, assignment as pastor.

Born on April 26, 1943, in Janesville, he was the son of Edward and Fay (Kennett) O’Rourke. He attended Abbot Pennings High School in De Pere, the now-closed Sacred Heart Seminary in Oneida and St. Francis Seminary in Milwaukee.

“In the 11 years that Fr. Mike was my associate,” he said, “I can say that he was really outstanding. You couldn’t help but like the guy. I don’t think that there was a wicked bone in his body. He gave himself over to other people.”

In 2009, Fr. O’Rouke led St. Mary in its sesquicentennial celebration as a parish. One of the events included taking a “family portrait” of everyone in the parish, standing outside the church. It was Fr. O’Rourke’s idea because he had found a similar photograph from the early days of the parish. He quipped at the time that, in 150 years, he wanted to be there for the next photo.

“Everybody here in the city knew Fr. Mike and they thought the world of him,” said Capuchin Fr. Larry Abler, pastor of nearby St. Joseph Parish. “I’ve had people from my own parish say that he was such a spiritual man. They really looked up to Fr. Mike and saw him as a holy man, a spiritual man.”

About himself on the parish Web site, Fr. O’Rourke had written, “I believe that, because of Jesus, we are called to be part of something good and bigger than any one of us — a family of faith, forgiveness, and care. At St. Mary, we try very hard to be such a faith family. … I invite you to be part of us with your heart — active in many ways — supportive of the good work done here by us. You are investing in the very best part of life — investing in your soul, your future, your fellow human beings and your God.”

Fr. Tom Long, vocation director for the diocese, grew up in St. Mary Parish and his family still belongs there.

“Fr. Mike truly loved the people that he served and he gave his whole self to serving them,” Fr. Long said. “He served them in a way that was not about himself, but it was about Jesus. And the people loved him in response.”

Fr. John Doerfler, diocesan chancellor, also grew up in St. Mary Parish. He called Fr. O’Rourke “a priest of great dedication, personal warmth and care for the people of God” who will “be greatly missed.”

Many in remembering Fr. O’Rourke mentioned his famous “High Fives,” his little skits during homilies at children’s Masses and his exuberant hugs after every Mass. Others remembered how he always thanked people for coming to Mass on Sundays, for “making the choice” to be with God and with others. Still others recalled his way of turning compliments into credit to God or to others, and his concern for those who were going through the pain of divorce, grief or health issues.

“Priesthood has not always been easy,” Fr. O’Rourke wrote for his professional listing in the diocesan pastoral handbook,” but it has given me a deep and lasting sense of purpose for my life. I meet the best of people, sometimes at the worst of times for them, and bring Jesus’ own touch and message of encouragement and hope for them. Priesthood has blessed me more than I could ever have dreamed.”

During the last months, Fr. O’Rourke had been instrumental in efforts to keep Catholic Central School, one of the five ACES Xavier system’s K-5 campuses open. Fr. Abler said they had just had a celebration about the school staying open a few days before Fr. O’Rourke’s fall.

“Number one,” Fr. Abler said, “he really cared for the kids over at Catholic Central. I visited the classrooms there today (Feb. 22), and it’s obvious that all those little kids are really hurting. They lost a friend.”

Fr. O’Rourke had also served as an advocate for the diocesan Marriage Tribunal, the Presbyteral Council (1998-2004) and the College of Consultors (2001-2005), and was currently a member of the Pastor’s Review Panel. He is also the author of the book, “Come, Follow Me.”

The funeral Mass is scheduled for 11 a.m. Friday, Feb. 26, at St. Mary Church, 312 S. State St., with Bishop David Ricken as presider and Fr. Abler as homilist. Visitation was to be held at the church, both Thursday evening and on Friday, starting at 9 a.m. An 8 p.m. prayer service was held Feb. 25. Burial will be in the parish cemetery.

Donations may be directed to the Keep All ACES Schools Open Fund.